Recap of the Moose and Marlies game. 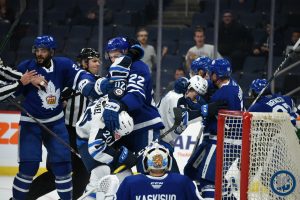 The Moose came into their home opener having split last weekend’s two-game road trip to Texas and would be looking to face a very experienced Marlies team.  Kudis to the intrepid fans who made the journey to Bell MTS Place in this winter wonderland Winnipeg got hit by over the past couple of days.

The Marlies opened the scoring just under the mid point of the 1st period when Egor Korshkov put home a rebound after Mikhail Berdin made a nice save.  The Moose would even the score when defenceman Jimmy Oligny made a nice decision to pinch and keep a puck in the Toronto end.  Andrei Chibisov retrieved the puck, used his big body to create time and space and then fired a shot on net that (somehow) beat Marlies goalie Kasimir Kaskisuo.  The visitors would re-gain the lead late in the 1st when almost all of the Moose players were on one side of the ice which left Pierre Engvall wide open to walk in on Berdin and fire a shot past him to make it 2-1 for Toronto.  Opening period would end 2-1 for Toronto and they held a 10-5 shot advantage.

Logan Shaw got the home crowd back into the game when he forced a neutral zone turnover and went back the other way to tie the game shorthanded. 2-2 in the 2nd. It was his second goal of the season.  Jansen Harkins poked home the puck but it was covered (or appeared to be to the ref) so no goal was called and then all hell broke loose. Skyler McKenize fought Winnipegger Adam Brooks. Not the biggest boys but they had a good middleweight tilt. There were lots of penalties in the middle frame but aside from the Shaw goal that was all the scoring and it would end 2-2 after 40 minutes.  Manitoba outshot the Marlies 9-7 in that period.

On a delayed penalty call the Marlies with six players on the ice gained control in the Moose zone and Tyler Gaudet re-directed a puck through Berdin to give the visitors the 3-2 lead early in the 3rd.  The Moose would come close to tying the game but just couldn’t equalize things and dropped their home opener 3-2 to Toronto.

Sami Niku on whether it is hard being sent down and getting back into the swing of things “It’s pretty easy actually. I just play hockey. I like to play hockey. Here I play a lot so its fun to play here.”

Moose bench boss Pascal Vincent had this to say about Sami Niku “He needs to play minutes. That’s what he needs to do. It’s just a matter of playing minutes.  He hasn’t played much in training camp because of the accident so the goal is to play him minutes.  You could tell his 2nd period he was better and in the 3rd period I thought he was pretty dominant.”

I saw that there was a Marlies player named Hudson Elynuik on the ice which made me wonder if he was related to Jets 1.0 forward Pat Elynuik. Pat is his dad. And it made me feel old.  For those who don’t remember Elynuik was the Jets 1st round pick (8th overall) in 1986.  He played four seasons in the ‘Peg and Moncton home of their farm club before being traded to the Capitals for John Druce.

I thought Andrei Chibisov and Joona Luoto were notable for some of the things they did well during the game.  Chibisov was able to use his size to create space for himself.  Luoto is a physical player who wasn’t afraid to engage.

CJ Suess continues to do a lot of little things right;
Jansen Harkins didn’t have as good a game as he had last week;
Kristian Vesalainen had a couple of chance but leaves you wanting to see more.

The Moose don’t have any time to rest (well they have a little) as they will face the Marlies again tomorrow afternoon at 2 pm.