The Marlies sweep the weekend series 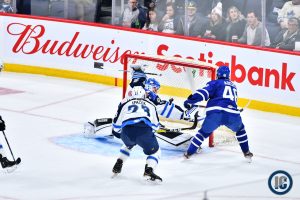 The Moose were looking for a bounce back game after dropping their home opener against the Marlies last night 3-2. The only changes originally planned were Jimmy Oligny coming out of the lineup for Jets 2016 3rd rounder Luke Green and Adam Carlson getting his first AHL start in net since the 2017-18 season.

The Moose got some bad news pre-game as defenceman Sami Niku, who was scheduled to play this afternoon, was a late scratch.  This meant that Jets 2017 3rd round pick Johnathan Kovacevic would have an opportunity to play in his first game of the season.

I was expecting the Moose to come out hard after last night’s loss in the home opener but it was pretty even for most of the period.  Most notable was how quickly the game was played as there were very few whistles which was a theme that continued for the duration of play.  The home side however couldn’t clear the zone late in the 1st period and after a puck hit a screened Adam Carlson it landed on the stick of Pontus Aberg who easily put it home to give Toronto a 1-0 lead.  Shots were 10-8 in favour of the visitors after 20 minutes.

There was a 5-10 minute sequence in the middle frame in which the Moose just couldn’t contain the Marlies and Toronto burned them scoring twice to take a 3-0 lead.  Adam Carlson made a huge stop preventing the score from becoming 4-0 in the 2nd but unfortunately the Moose weren’t able to solve Joseph Woll for a second consecutive period.

It went from bad to worse when the 3rd period got underway as the Moose had a power play opportunity which could have gotten them back into the game but instead Jansen Harkins made a saucer pass at the blueline which was intercepted, taken the other way and deposited by Egor Korshkov behind Adam Carlson to make it a 4-0 game.

After the game bench boss Pascal Vincent indicated that Sami Niku was pulled because of a lower-body injury. He said Niku wanted to play and that it happened a few days ago and that Niku pushed through it. Said it is just a matter of time, but nothing serious.

The Moose will have a weekend series at Bell MTS Place when they welcome the Iowa Wild to town on the 18th and 19th.