Return of the Jets: Top 5 choices to be Winnipeg’s 1st Home Game opponent?

There is a lot of talk of the NHL hockey possibly returning to the city of Winnipeg and that there may already be a 2nd alternate schedule for the upcoming 2011/12 season. We here at IC have decided to take a look at the Top 5 teams which could be the very 1st opponent of the new incarnation of the Winnipeg Jets.

If you go back all the way to Sunday October 14th, 1979, the then “new” NHL version of the Winnipeg Jets, the former powers of the WHA, played against one of my other favorite NHL teams (based solely on their jerseys) the Colorado Rockies coached by none other than Don Cherry.  Luckily for those Jets, as bad as they were, the Rockies were even worse and the Jets won their home opener 4-2.

But who would be an appropriate opponent  should an NHL team return to Winnipeg in 2011/12??   When the Jets left for Phoenix in 1996/97 there were 26 teams in the league but this doesn’t mean that they couldn’t have a rivalry with the expansion teams that subsequently began play following the Jets move.  Let’s take a look around the league and see who would rate as the best opponent.

Of course, considering that both Phoenix & Atlanta are in play it will be appropriate to look at if from both perspectives although as we considered when we looked at ‘Which Division a future team in the city should play in‘, rivalry is usually based on proximity.

The team that ended it all, is the team that should get it all started.  Since the Jets played that last, memorable series in 96′ against the Wings, Detroit has been burnt into the collective memory of people in Winnipeg. 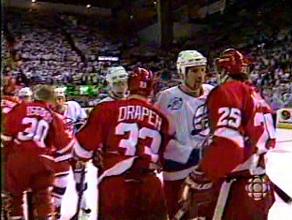 Here is an example of a team that was founded well after the Jets had left for the desert, but one which would be a good first home opponent.  They are the closest team in terms of physical distance between Winnipeg & St. Paul.  If as discussed last week, the new team in Winnipeg ends up in the Northwest division, then the Wild will be our closest regional rival.  And if you think that the old North Stars and Jets didn’t really have much heat, check out this video.

The Flames had a sea of red and in response fans in Winnipeg developed our trademark Whiteout back in 1987.  The Jets only successful victories in the post season were against the Flames in 1984/85 and 1986/87.  A lot of people transferred loyalty to the Flames when our Jets left(including a number of IC writers who cheered the Flames on at Game 6 of the Stanley Cup Finals back in 2004).  However it won’t take long for that “transferred loyalty” to be replaced with a desire to see the Flame extinguished. 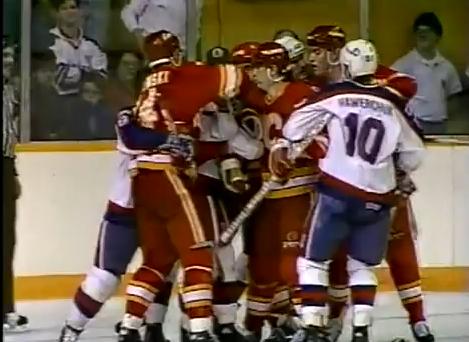 While these Oilers are a lot different than the ones faced in the 80’s, many people in Winnipeg ‘s remember the 6, yes 6 losses in the post season, including  blowing a 3-1 series lead in 1989/90.  There was no opponent more difficult for our old NHL team.  With a young, up and coming Oilers team and with both cities regularly disregarded by everyone else, Edmonton is a natural rival for a new NHL team in the city. 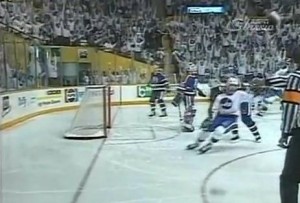 Obviously this pick totally relies on which team has been moved to Winnipeg.

If the team moving is the Phoenix Coyotes, then seeing Teemu Selanne in the MTS Centre on opening night would have the crowd on it’s feet the entire game.  The only negative I can see from this, is it might be difficult to tell who the crowd is cheering, their new NHL squad or one of the greatest and most beloved players to ever slip on the Jets logo.

If you assume that the team that is going to be moved is the Atlanta Thrashers, then there isn’t any question that the first home opponent has to be the Phoenix Coyotes.  While Phoenix might be close to 33oo km’s (2000 miles) away, the disregard between the fan bases is palpable, would make for a rivalry that won’t rely on proximity to sustain it, and would finally give Winnipeg it’s true “Battle of Alberta” style opponent.

As always we welcome your opinion on this subject.  Feel free to comment (via facebook or wordpress) or send us a tweet @illegalcurve and let us know who you would pick for the Top 5 opponents to face a new NHL team in Winnipeg.