CTV Winnipeg:  Plans for Winnipeg celebration taking place, despite no official confirmation on NHL return.  All I can say is that there better not be another “dry run” party at Portage & Main and/or the Forks like 10 or 11 days ago.  The city is too emotionally invested to keep being put off.

11 Alive (NBC Atlanta Affiliate):  There are not enough of us to keep Thrashers. Says one of the ASG owners.

Atlanta Journal Constitution:  Thrashers-to-Winnipeg draws closer.  Appears that this is all but over as we await word from ASG”s lawyers that they’ve signed the deal.

The person said no late offers have been received from any potential bidders to keep the Thrashers in Atlanta.

Toronto Star:  Jets?  Thrashers? Moose?  Many questions as NHL poised to return to Winnipeg.  Didn’t take long for the Centre of the Universe media to start throwing mud on our white tuxedo’s.

CBC:  NHL announcement imminent for Winnipeg.  We’re hearing it could be made at 3 pm but either way, let’s hope this announcement comes tomorrow, regardless of what time same is announced.  For all the latest as it happens, be sure to follow @illegalcurve on twitter.

Toronto Star:  Thrashers to jet to Winnipeg Tuesday?  Appears that it’s time to remove the question mark from the above head line.

“Barring any last minute changes the plan is to formally announce Thrashers moving to Winnipeg as early as 10 am tomorrow.”

TSN:  Winnipeg talks progressing towards possible announcement.  I can’t see this announcement happening if not on Tuesday, until after the Stanley Cup.  Gary Bettman has too good a storyline between the Bruins/Canucks to allow it to be sidetracked by Winnipeg talk which would absolutely dominate the Canadian media and likely spillover into the start of the Stanley Cup.

Leader-Post:  I’m still waiting for the big day.  I can empathize with the writer as I myself used a similar “connection to my city” to rationalize following a team.  In my mind, when I moved to Michigan it was “ok” to cheer for Detroit since the Wings had Darren Helm from St. Andrews, Manitoba, Derek Meech of Winnipeg, Kris Draper who played for the Jets and former 80’s star of the Jets and Wings Assistant Coach Paul MacLean.  However no matter how hard I cheered for the Wings, my heart was always screaming “Go Jets Go”. 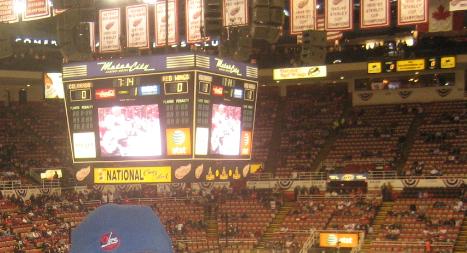 Winnipeg Sun:  Former Moose goalie wishes it had worked in Atlanta.  People often point to the Hawks, who were in dire straits a few years back and suggest that this is what could become of the Thrashers under good ownership but if so, why has nobody of substance stepped up to take a chance on the team?

Winnipeg Free Press:  Cool your Jets – root for ‘Canada’s team’.  Which is Canada’s team?  All but 1 forward for Boston, was born in Canada.   Vancouver is a mixed bag for Winnipeg hockey fans.  Many of us still remember that they eliminated us from two consecutive playoff series(1991/92 & 1992/93).  Of course many of us cheered them on in the 1994 Stanley Cup Finals vs. the Rangers.  I would think that many would support the Canucks by virtue of the fact that more than half their roster came through Winnipeg playing for the Manitoba Moose of the AHL.

The Morning Journal:  Winnipeg deserves the Jets.  Appreciate the solidarity we get from other cities that have experienced the pain and loss associated with losing a professional sports franchise.  Luckily of the teams that relocated to new destinations in the 90’s, Phoenix is the 1 team which hasn’t won a Stanley Cup.  (Minnesota – Dallas, won Cup in 99′.  Quebec – Colorado, won Cup in 96.  Hartford – Carolina, won Cup in 06′.)

Sporting News:  Formal announcement likely Tuesday.  I don’t see how this won’t dominate the news cycle for the next few weeks. 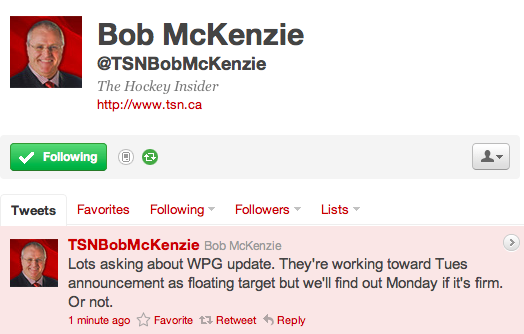 Picture of the Day – Insulting or Funny? 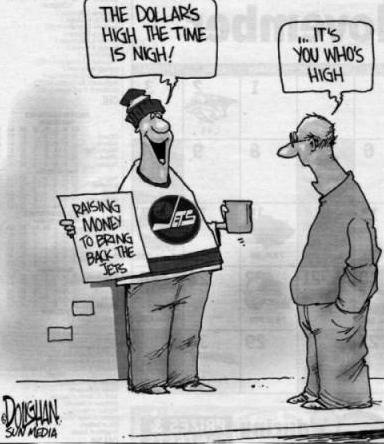