NY Post:  Brooks Sunday tidbits.    A blurb about the TV contract and Brooks adds this:

Winnipeg Sun:  Winnipeg franchise names scooped up.  Lots of speculation out there.

Winnipeg Free Press:  Lies, damn lies & NHL Hockey.  I’m not sure if he was listening to the IC Radio show yesterday but it appears that Richard’s rant (basically how NHL needs Wpg more than Wpg needs NHL) has spread to the print media.

“I am thrilled,” he says. “Absolutely thrilled. How could I not love Winnipeg? Five months before Fergie hired me to coach the Jets I’m standing on my front porch, yelling at the mailman because I don’t have a job. I can’t even get arrested, right? Then, there I am, five months later, riding in a convertible, hugging the Avco Cup, the whole city’s out celebrating at Portage and Main.

CBC:  Toews likes NHL in Manitoba.  Enjoy hearing the continued pro Winnipeg talk we hear from players in the NHL.

Winnipeg Free Press:  Toews itching to take on city NHL team.  So if he scores against the team here in Winnipeg, does he get booed or cheered?

Winnipeg Sun:  Room for Winnipeg in NHL – Toews.  Considering that the Hawks have a number of Winnipeg connections, I’m sure they would love playing in their hometown, that is until they start getting requests for free tickets. 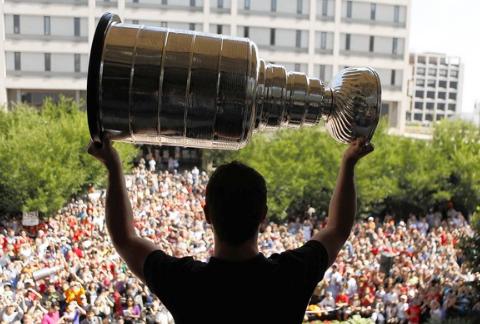 Winnipeg Sun:  What should NHL team be called?  Shocking.  An article that doesn’t mention the Jets name.  Only problem with his allegory is  he misses the fact that the owners of the puppy are asking you to buy their dog expensive treats.

CBC:  If NHL returns, party at the Forks.  People seem upset that they can’t party at Portage & Main but since we already did 10 days ago, it’s time for a new spot.

“Personally, yes. It’s nice to say you played in a city and for a team that is currently in the NHL. Having said that, the original Winnipeg Jets/Phoenix Coyotes franchise would be a separate entity from a modern Atlanta Thrashers/Winnipeg franchise, with a different set of records, players, etc. As a business, it would make sense for a new name to be chosen, but I, and most of the former players, would be more than happy to see the Jets name back.”

Matchsticks & Gasoline:  Winnipeg Jets / Atlanta Thrashers Relocation: Lessons learned and why everyone should support it.  Pretty rock solid article.  It will be a shame when we have to go back to disliking the Flames.

The State of Hockey:  Does a move to Winnipeg mean success for the NHL or did the NHL move to wrong Canadian city.  The writer’s concerns have likely been taken into account by Chipman and Thomson before they decided to begin this endeavor.  Had they not thought it viable, they would have continued to make very good money with the Moose in the AHL rather than risk it on a “questionable” NHL venture.