Note:  We will have a very special 5 part feature brought to your throughout the day, so make sure you have your Illegal Curve RSS feeds active or ensure that you follow us on twitter @illegalcurve.

Atlanta Journal Constitution:  Waddell’s job, Thrashers name will end with sale.  Interesting that they are retaining the Thrashers name.

Globe and Mail:  Wheeler looking ahead to ‘awesome’ Winnipeg debut.  I think everyone in the city is excited to see regular season hockey in October.

“I’m a Jets fan 110 per cent,” Ashton said. “Winnipeg is one of the most hockey-oriented cities in Canada. There’s no question now that this team will be one of the favourites in the country.”

For more Jets alumni news tune into a special edition of the Sports Radio 1290 broadcast from 2 pm cst to 4 pm cst, which will include Doug Smail, Phil Housley, Mike Eagles and Fredrik Olausson.

CBC:  Return of NHL hits Winnipeg in its wallet.  Which is why people here in Winnipeg need to stop acting like they’re being given something for free.  There is going to be a significant cost to the community, which while I’m sure it can handle, needs to be recognized as a significant partnership.  This isn’t a 170 million dollar gift.

Winnipeg Free Press:  Winner-peg gets it game back.  I would suggest it isn’t exactly at “no charge” since they were forced to overpay for the Thrashers.

The NHL still owns the Jets name and Bettman said True North’s purchase will include it, if requested, at no charge.

Globe and Mail:  Small-market cities need more than fervent fans.  Let’s be realistic, the NHL was desperate but there has to be a reason they allowed a team to return to Winnipeg.

Calgary Herald:  President won’t make the trip north.  Lots of work in the days and weeks ahead for the True North team. 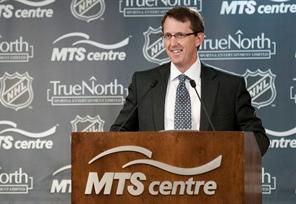 Edmonton Journal:  Plenty to do before team hits the ice.  No time for napping, big decisions still need to be made.

Calgary Herald:  Flames president glad to have Winnipeg back in fold.  I’m a big fan of Ken King’s.  When we went to Game 6 in 2004 and had rush seating so had to arrive 2 hours before game time, he came out and thanked the fans for the support.

Calgary Herald:  Ex-Jet Elynuik can still see sea of white.   One of the best traditions of the Jets which unfortunately due to home team’s wearing dark jerseys is somewhat antiquated.

Calgary Herald:  Flames recall heated rivalry.  If it wasn’t the Oilers it was the Flames that killed the Jets in the 80’s, although we did boot them from the post season.  Oh how I loved that Smythe division.

Winnipeg Free Press:  Now, about that team nickname thing.  I’ve heard from an IC reader that there are die-hard North Star fans who still refuse to wear a Wild jersey.  Something to think about.