Will a return to the junior ranks do the Jets Mark Scheifele a world of good?

I think like-minds can agree that Mark Scheifele is a great talent and that he had a phenomenal training camp, easily earning a spot on the Jets. I think we can all agree that its time for the Jets to do the right thing in terms of asset management and send him back to the OHL.

The 18 year old played a respectable 13:44 in the first game against Montreal, registering one shot on net. That total dropped to 9:25 in game 2, with no shots and a minus. The Phoenix game saw his highest ice-time total, with 16:22, before Monday’s 7:06.

The fact of the matter is that Scheifele is not impacting games at this level. In watching last night’s hard fought win against Pittsburgh, the youngster did not seem to be able to muster the same urgency as his teammates, and displayed none of the creativity or talent of a Burmistrov. To my eye, he has been tentative and a step behind the other players. 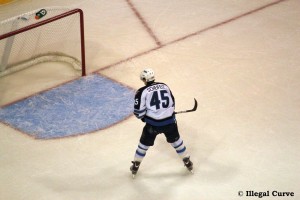 Several commenters on Twitter noted that Scheifele was not a dominant player in the OHL last season, and should be sent back for that reason alone. While I agree that, on the whole, his OHL season was not prototypically dominant, he did show a marked improvement by the spring and was building momentum intro the draft.

For me, it is the momentum that is the key to Scheifele’s return. As a young player just hitting his stride, it is my opinion that a return to the junior ranks would bolster his confidence and let him continue to add to his impressive resume. Playing under 10 minutes a night in Winnipeg will stunt the momentum Scheifele had been building and may damage the confidence of this young man.

While proponents of keeping Scheifele in Winnipeg could point to the positive benefits of exposing him to the faster game and his learning how to be a professional, one could counter that even a brief period of inactivity could seriously hamper the long term potential of the former 7th overall pick.

The Islanders’ Ryan Strome was recently sent back to junior and has been on a hot streak ever since. I would imagine that Scheifele would enjoy similar success and would be all but a lock to make Team Canada this Christmas.

I understand that Scheifele making the team out of camp was just one more feel-good story for the Jets, but if the team is to stay true to its mantra of steady team building, Scheifele must go back to junior. There are several options for call-ups in St. John’s, and both Scheifele and the Jets will see positive rewards from the move.