The Jets lost a disappointing game last night to the Leafs but they have no time to dwell as they take on the Senators in Ottawa tonight. 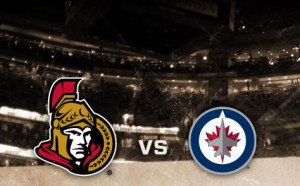 The Jets lost to the Maple Leafs 4-3 in a shootout Wednesday night after leading for significant parts of the game. The Jets outshot the Leafs 29-23 and had a two goal lead in the third period but the Leafs scored two goals in 27 seconds and took the extra point in the shootout on goals by Joffrey Lupul and Matt Frattin.

Coach Claude Noel might not be happy that the Jets didn’t get the extra point in the shootout but he must be happy that the Jets finally scored on the power-play. Going into Wednesday night’s game the Jets were 0-for-17 on the man advantage, so the two power play goals scored by Tobias Enstrom and Mark Scheifele were fairly significant to say the least.

In Ottawa, there are lots of problems. The Sens have yet to win in regulation this season and were shellacked by the Philadelphia Flyers 7-2 Tuesday night. The Senators are giving up an average of five goals a game and are not getting offensive production from enough players on their roster.

There have a been a few bright spots for the Sens however. 2nd year defenseman Erik Karlsson has been one of the team’s best players and leads the league in assists with seven. Also, the Senators power play has been decent, clicking at a 24% success rate.

Coach Noel will still be looking for more production from his top line in the nation’s capital. The top line of Andrew Ladd, Bryan Little and Blake Wheeler did have sustained pressure in Toronto at times, but the line continues to have trouble producing on the scoreboard. Jets third year forward Evander Kane is in the same boat and still has not registered a point in four games.

After tonight’s game, the Jets will return to Winnipeg for home games against the Carolina Hurricanes on Saturday and the New York Rangers on Monday.

Injury Note: Dennis Beyak of TSN/TSN Radio 1290 has reported that Jets defenseman Ron Hainsey will be out two weeks with an upper-body injury…..