The Jets play their first road game in Canada, when they head to the ACC Centre. 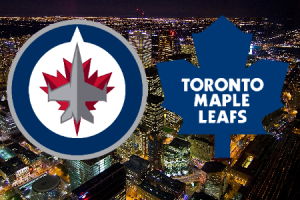 The Story: In case you’ve been living somewhere in Siberia or don’t have TSN Sportscentre, the Winnipeg Jets got rid of the pink elephant in the dressing room on Monday night and earned their first victory of the season, a 2-1 win over the Pittsburgh Penguins on home ice.

It was perhaps extra important to get that first win because the Jets will play nine of their next eleven games on the road, beginning tonight with a match against the Toronto Maple Leafs. The Jets will travel to Ottawa for a game Thursday night, return home for two home games against Carolina and the New York Rangers before embarking on a stretch that will see the team play seven straight road games from October 27th-November 8th.

The Jets roll into T-Dot with some swagger after defeating a Pens team two nights ago that was missing forwards Sidney Crosby, Evgeni Malkin and Tyler Kennedy. The Jets played  a solid two-way game, limited mistakes and got superb goaltending from Ondrej Pavelec, looking like a more confident group from the minute the puck was dropped. Or, should we say from the second the puck was dropped because Jets forward Kyle Wellwood in fact scored 8 seconds in to the game, tying the record for fastest goal scored at the beginning of a game in Thrashers/Jets 2.0 franchise history.

The Jets will have to curb their enthusiasm tonight though as the Toronto Maple Leafs have been a resilient hockey club so far this season, defeating the Montreal Canadiens, Ottawa Senators and Calgary Flames. The Leafs have been led offensively by Phil Kessel, who currently leads the entire National Hockey League with six goals and nine points. Kessel has shown tremendous speed and an equally effective quick-release shot that has befuddled goalies around the National Hockey League.

On the Jets side, it is Alexander Burmistrov who is getting all the attention these days. Burmistrov was voted the 2nd star of the game after Monday’s game against Pittsburgh, recording assists on both Jets goals. Burmistrov was flying around the ice and at times displayed the poise and puck wizardry of Pavel Datsyuk. The line of Burmistrov, Wellwood and Nikolai Antropov was particularly good against the Penguins and has arguably displayed more offensive chemistry than any other line on the Jets.

There are still some major concerns for Jets Head Coach Claude Noel however.

The Jets Power Play has yet to score in 17 opportunities and Noel has yet to find a forward combination that seems to gel together. The defense pairing of Tobias Enstrom-Dustin Byfuglien is set in stone though and has done a good job but they have been snakebitten in four games thus far. Speaking of snakebitten, the Ladd-Little-Wheeler line has two points combined in four games. That’s simply not enough production for a team that isn’t stocked with natural goal scorers and Noel knows it.

NOTES… Left Winger Evander Kane is expected to be back in the line-up tonight. Kane missed Monday’s game against Pittsburgh with a lower-body injury suffered after blocking a shot in last weekend’s game against Phoenix…..Winnipeg-born defenseman Derek Meech will make his season debut against the Maple Leafs. Meech will replace Ron Hainsey, who suffered a lower-body injury in Monday’s game against Pittsburgh……Defenseman Mark Stuart should be in the line-up tonight in Toronto. Stuart was shaken up after blocking a shot in Monday’s game and had to leave the ice for a short period of time……Jets rookie Mark Scheifele will have family in attendance at tonight’s game. Scheifele is from Kitchener, Ontario and played for the OHL’s Barrie Colts last year……