In the realm of dark horse prospect’s, Michael Forney may be one of those guys who you should have seen coming, but didn’t.   A 2006 3rd rounder (80th overall) by the Thrashers, Forney is a product of the Thief River Falls, MN high school hockey program.

A very promising high school player, Forney attempted to make the jump directly from the Thief River Prowlers to the University of North Dakota Fighting Sioux (with a 3-game pit stop in Des Moines of the USHL).   As is evidenced by his very brief stay in Grand Forks, the transition was not smooth.  Slowed by injuries, Forney never really adapted to the pace.  Forney played (sparingly) in 19 games over two seasons with the Sioux, registering only 2 points.  I recall one painful (to watch) sequence when the Sioux were hemmed into their own zone, with Forney on the left wing.  He had numerous chances to clear, but was either stapled to the boards or just failed to get it out.  The other team (I forget who) ultimately scored and Forney never saw the ice again.  His body language in games and even in pre-game skates told a lot, he was just out of his element.

Forney made a pretty astute move in the fall of 2008, going back to junior and playing a full season with the Green Bay Gamblers.  Scoring a point per game with the team, Forney rediscovered his scoring touch and was said to be very eager to play and very coachable.  He even added a little grit to his game under Coach Jon Cooper.

Forney has spent the last two seasons with Gwinnett in the ECHL, with brief stops in Chicago of the AHL. He scored 66 points in 66 games with Gwinnett last year, and figures to move on to the Ice Caps this season.  Having had the chance to see him skate in a few workouts this summer, Forney seems to have filled out his 6’2 frame and quickened his step.  He has an excellent shot and sees the ice very well.

Fellow Illegal Curver Richard Pollock also remarked favourably on his performance at the Jets camp, noting that he was often around the puck and seemed have added some explosiveness to his game. 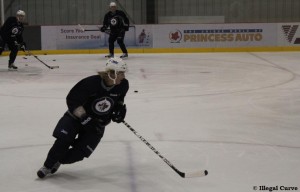 The Jets will have to make a decision on Forney this year, as he is in the final year of his deal.  I would be that Forney, with all his arrows now pointing in the right direction, will show well in the American League and be offered another deal.  He has scored well with every team he has played on (excluding the Sioux) and has a good track record internationally. Forney has obviously shown a commitment to improve and to overcome his rocky start and will hopefully be a contributor for the team down the road.

On the Farm: The Postma always rings twice
Under the Microscope