On the Farm: The Postma always rings twice

Going into his third AHL campaign, Paul Postma is knocking (or trying to knock down) the door to crack the Jets lineup full-time. With only one NHL game to his credit, becoming a Jet won’t be easy, and it likely won’t happen this season.

That isn’t a slight on Postma, who led his squad – the Chicago Wolves – in points by a blue-liner with 45 last season. But for now it’s pretty clear that he’s an IceCap, or at least that’s the way it will look until some injuries arise.

Still basically a youngster, at only age 22, Postma is viewed as one of the Jets’ top prospects. The scouting report on this kid is that he can move well for his size (6’3″), doesn’t really need to have mean streak because of it, and has obvious offensive upside. 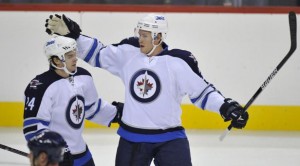 Drafted in the seventh round by the Thrashers in 2007 after a 24 point season with the Swift Current Broncos, Postma eventually went on to become a premier defender in the WHL, registering 84 points with the Calgary Hitmen two seasons later. He was then signed to an entry level contract with Atlanta.

With the Jets boasting a blue-line of seven guys under contract, the chance for Postma to reach the NHL in the immediate future looks pretty bleak. After signing Randy Jones, who has shown an ability to chip in a few points as well, the roster became blocked for the Jets. And Postma will likely have to wait another year to step in on a regular basis for the IceCaps’ parent club.

The key to all of this, however, is that the Jets will have both Jones and fellow defenceman Johnny Oduya on expiring contracts this season. Jones, now thirty, seems to be on the decline in terms of production, with only 13 points in 63 games this past season with Tampa. This makes me wonder if the Jones signing, only one year, is seen as a stopgap solution that will eventually open room for Postma to step in.

It’s up to Postma himself to prove that this is indeed the case by matching, and perhaps exceeding his performance from last season. The more points the better, and it’s clear that while he waits for his chance to become a Winnipeg Jet, Postma will be arguably the IceCaps’ most important player.

Editor’s Note:  Ryan is based in St. John’s, Newfoundland and has an excellent blog about the Jets AHL affiliate IceCaps.  He will be giving our readers some insight into what is happening ‘On the Farm’ each week.  If you have any questions for him about what is happening with the AHL franchise, send him an email at ryanfancey@gmail.com and follow him on twitter @SJ_IceCaps.