NHL players are required to speak to the media after practice, before games, and after games. 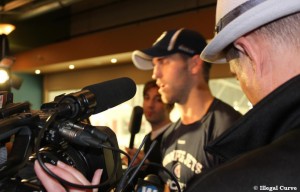 After Tuesdays exhibition game, reporters huddled around the dressing room door, waiting to rush the floor, trying to get the best soundbyte. The cycle will wash, rinse and repeat daily, but Tanner Glass doesn’t mind the media scrutiny:

He went on to explain that as players move up the levels of hockey, some training and tips are given on how to handle themselves with reporters.

“When you start going to those development camps, they give a little tidbits here and there, you talk to the veteran guys and learn as you go. As you go you find your voice and how you want to be perceived in the media.”

With a few days in between games, players may be answering the same question over and over. For Glass, it gives him an opportunity to refine his craft of talking to the media.

“I tend to get my answer down, and it’s the same answer”

The Winnipeg Jets are making adjustments, not only to a new city, a new organization and new coaches, but the media scrutiny is something only seen in other Canadian cities and major hockey markets. Tim Stapleton describes the difference from last season as “crazy”:

“It’s crazy, in Atlanta, we might have had 2 reporters, after games, but here it seems like there are more reporters than players. I played a year in Toronto, I got an idea of it, it’s pretty crazy, and it’s a lot of fun.”

“(Winnipeg is) even more extreme (than Toronto), in Toronto, I was blindsided by the loyalty of hockey there, the fans, media. Here it’s even at an extra level. It’s a smaller city, and you have a lot of fans who have been waiting for this for 15 years. It’s pretty crazy right now.”

Ben Maxwell who was traded from Montreal to Atlanta in February of last season, has a similar point of view.

“I went from Montreal where we had about 40 guys traveling with the team, to Atlanta where there was only two guys. It’s a similar thing here in Winnipeg where there are more media than there are players. It’s a little more pressure on a lot of the guys, especially those who are more in the spotlight. Knowing some of these guys, I’m sure we can handle it.”

The media hype machine will be in full force leading up to October 9, as Globe & Mail columnist Roy McGregor pointed out on Saturday’s Illegal Curve Hockey Show.

“The thing that you are going to have to deal with is the most incredible ennui you could ever imagine, the boredom that is going to set in. People are going to be screaming at the top of their lungs, DROP THE PUCK, because it gets to be an outrageous situation of wait and wait and wait. There is an 8 day gap between the final exhibition game and the home opener that will be painful.”

Rest assured, as the media hype grows in the lead up to October 9, Illegal Curve will be right there covering the phenomenon with the same intensity that you have to expect from you home for Jets Hockey.