I believe I have mentioned at least on one occasion that the Jets (and the former Thrashers) seem to have more than their fair share of prospects with interesting stories. Leveille is yet another name to add to that list, being the first player drafted in the first round out of a Junior B program.

Leveille, who played Junior B hockey in Ontario during his draft year, (which is a higher level of hockey than Junior B in Western Canada, etc.) enjoyed a good deal of attention from scouts attracted to his elite-level speed and offensive instincts. Though Leveille was very slight of build (weighing as little as 150 pounds), he was ranked as high as 48 by ISS and the Thrashers selected him 29th overall in 2008. Drafted by the Ottawa 67’s of the OHL, Leveille was committed to Michigan State, which in retrospect was likely the right choice for this late bloomer, given the oft-repeated notion that he had to gain strength to be effective at the professional level. 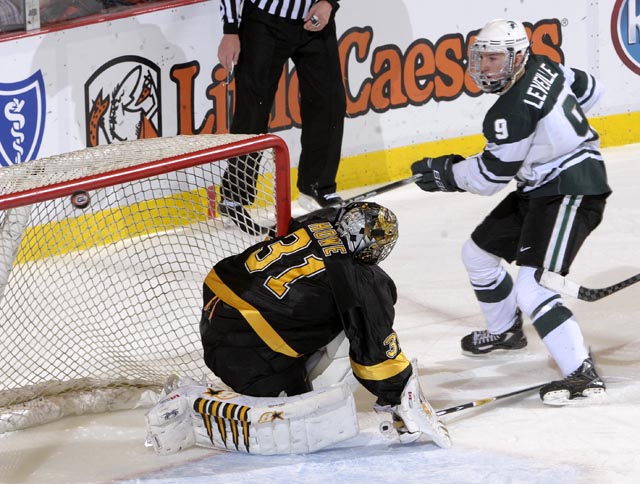 In his first season at Michigan State, Leveille posted respectable numbers of 9-8-17 in 38 games, but with a -19 rating. You’ll never catch me raving about my love for +/-, but it can at least tell us that Leveille was playing an awful lot with the puck in the own zone. It should also be noted that the 2008-09 Michigan State Spartans were awful, going 10-23-5. Leveille was also the youngest full-time player on that team.

More on Leveille after the jump.

Leveille, a native of St. Catherines, ON, has improved his point totals slightly during his sophomore (6-19-25) year before taking a step back in an injury-shortened junior year (8-10-18) in East Lansing. Leveille did, however, drastically improve his +/- totals, jumping to +14 as a sophomore and falling back to -3 as a junior. Leveille also suffered some personal tragedy in his junior year, with his brother Clayton passing away.

Going into his senior year, Leveille will be looked upon to lead the Spartans offensively. Still only 6’ and 175 pounds, Leveille is adding weight to his slight frame and working on becoming a more rounded player. First year coach Tom Anastos will likely have Leveille centering State’s top line, so I would expect his point totals to increase along with his ice time. 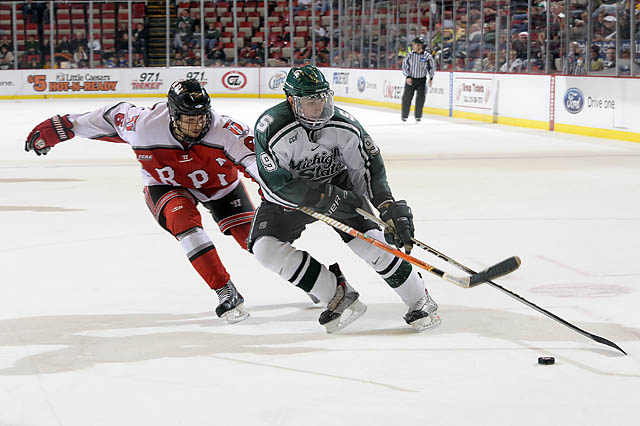 Looking into the future, it is unclear what type of role Leveille would take with the Jets’ organization. I asked around about his game, and though speed and skill were mentioned consistently, so were lack of hockey sense, poor decision-making and lack of strength.

Though he possesses all-world speed and excellent offensive skills, Leveille has yet to dominate the college game. He has stated that he sees himself as a playmaker, which his stats reflect, but also that he needs to get bigger and stronger (setting a goal of 185 pounds). I would think that he could use his speed to make himself into a Todd Marchant-type, being a penalty killer and defensive specialist who could supply a few goals along the way, but Leveille will still have to work at getting stronger to adapt to the professional game and the length of the season. As with most prospects, only time will tell.