Winnipeg Jets Assistant General Manager Craig Heisinger spoke to the media this afternoon in regards to the death of Rick Rypien. He did not have a prepared statement, but took questions from the media on Rypiens’ personal issues, and the type of player he was on the ice. 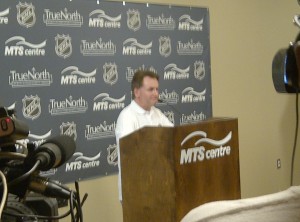 On Rick Rypien as a person

“He was a real good guy, I got to know him first as a player when he played for the Regina Pats and then he started here on an amateur tryout, he was just a safe simple guy, but a pretty easy home life, barely had a bank account. Just a simple guy, with some issues to deal with”

What qualities attracted Zinger to Rypien as a player?

“After a 7-2 loss to the Brandon Wheat Kings in this building and he was blocking shots in practice the next day. That’s what attracted me to Rick Rypien. He could skate and he did that.”

“I had watched him play junior, and he was a good hardnosed player, I watched the Wheat Kings pound him into submission one night, and went to watch practice the next day because Curtis Hunt was a friend of mine and Rick was blocking shots in practice. I remember going down to the dressing room and saying tell me more about this guy, and it went from there. He was a true character guy, the coach Curtis Hunt really went to bat for him; we offered him an amateur tryout. There wasn’t a long line, his agent couldn’t say yes fast enough.”

Read more from Assistant GM Craig Heisinger after the jump

On his first stint with the Moose

“It was tough to get him into the lineup to start with, but once we did it was tough to get him out of the lineup. When he came in he was 5’11, 160 lbs, and Randy (Head Coach Randy Carlyle) was like, “where did you find this guy”. He wasn’t overly impressed with his size or physique, he did ok in the first practice, but once he got in, I think he established himself in the one fight here against Ole-Kristian Tollefson on Syracuse, he moved from there. He just wasn’t a tough guy he was a good useful player, he could skate he could physically get in on the forecheck, he could pound people with his body he was a good functional guy. At that time on that team we needed that in a 4th line centre role, and he fit real good.”

“He really believed in himself, he thought he could bring a lot to the team, I thought he could too, and so did the Canucks. We were not the only team at free agency trying to sign him. Waivers were never a consideration for Rick with the Canucks. Those type of players energy guys, that can skate, kill a little bit of penalty and are as tough as we was, are hard to find, similar to a 1st round draft pick despite all the issues, and the challenges that came with him, people were always going to give him a chance.”

“He had a lot of confidence in his game, his style was his style, he loved his style of game. Did he think he could do more, or provide more of other things offensively? Yeah probably, but nobody else expected that of him. He expected a lot of himself, but he did love being the style of player he was. He was the smaller bodied guy who fought two or three weight classes up and often came out on top”

On the circumstances surrounding his death

“I’m not going to expand on it a whole lot, certainly there were no drug and alcohol issues, his issues were depression, that is the word that has been used and that accurate”

On revealing the specifics

“That would be up to the family to say that, I do know the circumstances, I prefer that be left up to them”

How Zinger found out

“He was supposed to be in Winnipeg, board a flight on Sunday night to Winnipeg, for an MRI to have his knee checked. He had left me a message on Sunday morning when I was coming home from Europe, to give him a call; I must have missed him by only a couple minutes. He just wanted to know if there was some ice to skate at while he was here, he had an apartment set up. I never got to him, left him a message and texted him. We had a system going all summer when he would text back or call back within seconds, and he didn’t do it on this occasion. Rob our medical trainer, asked if I had seen him Monday morning for his appointment, I said I hadn’t. I spent some time trying to track him down, was unable to do so. Later in the evening, much like you guys, I hadn’t located him through his family or his grandmother, I started to see the odd twitter feed, and probably found him the same way you guys did. I spoke to his grandmother, and she did confirm the incident to me.”

Were there any signs?

“I think he had a fantastic summer, but obviously that wasn’t the case. Every communication I had with him, I didn’t see anything different than that. Seemed really excited to be back here, there was a comfort zone here for him, he had an apartment set up, was ready to go. The question being did we see any signs, no we didn’t”

“I forsure thought he’d made strides, I still believe that, he signed here. I think the predominant feeling was that I was the one that went to bat for Rick to sign here. That’s not 100% true, our pro scouts really liked Rick, I was probably the one that told them to back off a little bit here, there’s some baggage to deal with. At the end of the day did I think it was 100% safe, no because its Rick, and there’s sometimes issues with Rick. But I was comfortable with it and I was happy for him because I knew how much he wanted to play here and there was 100% level of comfort for him here. At the end of the day as an organization I think we felt that was worth providing to him”

“It’s a real challenge, it’s hard to put into words, its been a very challenging 24 hours, I don’t even think it’s been 24 hours yet. I’m hoping not to have to deal with it again. You learn lessons from these things. Rick always spoke about, once he had his situation under control, to speak out and help other people. At the end of the day, I hope something like this comes out of this. I’m having trouble trying to see how it will, but I suppose at the end of the day if Rick’s a lot happier today than he was yesterday, I’m happy for him.”

On the support provided by the Canucks

“I think the Canucks were really supportive of Rick during his time, not only through injury, through the time he had to leave to deal with his issues. The Canucks never questioned anything, they paid him right through. I think the level of support the Canucks showed him was phenomenal. From the Moose perspective, he started his career here, finished his career here, I think he gave a lot more back to us than we gave to him.”

On his return to the Moose last season

“I was really happy for him, I remember picking him up at the airport with that godawful long shamans beard. He seemed really ready to go, and really happy to be back playing. He didn’t care if it was AHL or NHL, he was just happy to be back playing. For Rick comfort was a big issue, playing back here was important to him, I thought in the playoffs he was arguably our best player 7 out of 10 games.”

How will the Winnipeg Jets honour Rypien?

“That’s too early to comment on, but it’s certainly been our history to honour people that have made an impact in our organization. Without getting too far ahead of myself, I would be surprised if we didn’t in some form”

The effect that this will have on the organization

“It’s an issue right now, but you deal with a variety of different things, Rick’s a person, we’re a business and life goes on. Everybody deals with this in their life, because Rick’s an athlete it’s a higher profile. People deal with this every day, and it’s no fun for anybody but we’ll get through the next through days here and we’ll move on”

On the length of time Rypien suffered from his personal issues

What triggered this event?

“I can’t answer that question, there are certain things over a course of time that have triggered these events, I never got any indication that there was something that was going to trigger it leading up until yesterday. I never got the sense that there were any problems all summer. I spoke to other people in the support group and none of us had that sense, and that’s a small tight knit group. Either something happened very quickly, or we all missed the boat”

What he will miss most about Rick Rypien

When Rick signed with the Winnipeg Jets in early July he seemed genuinely excited to be a part of the new franchised, and thankful for the opportunities that True North had given him.

He will be missed dearly.