Mark Stuart tells the media scrum his thoughts on the Jets losing streak and how the team needs to get back to a simple game.

Here are Mark Stuart’s thoughts in the post-practice media scrum after the skate at the MTS Centre. 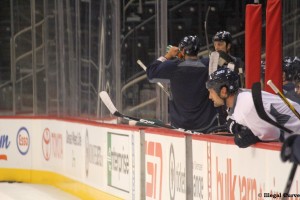 IC:  What did you think of the game last night?

Stuart:  Obviously I didn’t like it very much.  We had three games in a row where the effort and mistakes were very similar, so it was very disappointing.  We really wanted to go .500 on that road trip.  Chicago was a better game but we beat ourselves and last night we didn’t even give ourselves a chance.

Rick Ralph:  When the coach calls for an optional, what goes through the players minds?

Stuart:  It is up to the player but I think with the way things have gone, we had a pretty good group out there just to get a bit of a skate but it is early.  It is only 3 games and we have a big week coming up so it is up to the individual.  If they are here, fine.  If they aren’t here, fine.  As long as they are ready to play this week cause we have to make up some ground.

Ed Tait:  In a lot of ways it doesn’t matter who you guys are playing, it is on yourselves what needs to be fixed.

Stuart:  Give the teams credit that we played, but we made the same mistakes. In Chicago, we got a two-goal lead and then let them back into it and couldn’t come back in the end. (In Phoenix) they beat us to pucks, but a lot of it was us in our game. We need to concentrate on our game first and all that other stuff will take care of itself.

Ed Tait:  When you say mistakes are you referring to giveaways?

Stuart:  When you’re losing, I think it’s important to play a simple game, and that’s dumping pucks in and playing physical and winning races to pucks. As you press more and try to make plays, you’re going to turn it over in the neutral zone, and that’s going to hurt you even more.  I think we need to concentrate on the simple game right now until we get out of this hole.