Following today’s optional team practice, we caught up with Chris Thorburn to get his thoughts on last night’s game.

The Winnipeg Jets help an optional practice today following a disappointing game in Phoenix last night.  About 2/3 of the team showed up.  Only coach on the ice was goaltending coach Wade Flaherty.  Players ran drills on their own. 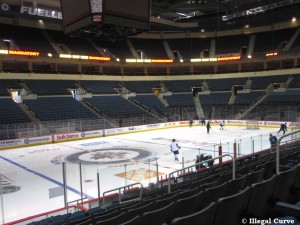 We had a chance to catch up with #22 Chris Thorburn to get his thoughts on the state of the Jets 3 games into this young season.

IC:  DId you take any positives from last night’s game?

Thorburn:  As far as as positives go, we did a few things.  But when you lose, you have to look at all the negatives and there were a bunch.  Some stuff that we need to clean up fast.  We just have to stay positive.  We have a great Pittsburgh team coming in here and there would be nothing better than to get our first win against an elite team.

IC:  When the coach says it is an ‘optional skate’, what does that mean to you?

Thorburn:  Throughout my career I’ve taken optionals as a time to do what you need to do to be ready for the next game.  I’ve always been the kind of guy who likes to skate so I just make sure my stuff is right so I am ready to go.

IC:  Coach Noel in his press conference earlier today seemed to be pleased with your line’s play so far.  How do you feel you guys have played as a group?

Thorburn:  I think we’ve done well.  Developed chemistry pretty fast with Glasser and Slates.  We are all on the same page as far as our game goes.  Play a pretty simple game, pucks up, pucks out, crash and bang and Jimmy got 2 goals in Chicago obviously and that is huge in terms of creating offense for our team.  That’s what we want to be.  We don’t want to be clock killers.  We want to be out there to make a difference in a positive way and if that means scoring goals and creating momentum, that’s what we are willing to do.

IC:  You had what appeared to be an empty net goal, how did you feel about that?

Thorburn:  I will never get a goal like that in my life, I don’t think, from the slot into an empty net.  I hit the middle of the net and then when I saw the ref blow it off I was kinda disappointed.  It was unfortunate.  We just have to keep pressing forward.

IC:  What did you think of the crowd?  Estimated that the pro Winnipeg crowd was about 2500+.  What was the feeling on the bench?

Thorburn:  It was awesome.  These fans have been unbelievable at the rink and in the streets.  They are behind us 100% and we definitely appreciate that.  We just have to show them that they have a great team to cheer for.  Actually guys on the ice from the Coyotes came up to me and said ‘ thanks for bringing the fans’.  We have Jets fans everywhere and we just have to give them something to be proud of.