The Jets 2.0 take on the Jets 1.0 in one of the craziest games we never thought we would ever witness. Will the first victory for the new Jets come at the expense of the old ones?

The Story: The Winnipeg Jets are still looking for their first win of the 2011’12 NHL Season and Glendale, Arizona just might be the perfect place for them to find it. The Jets lost to the Chicago Blackhawks 4-3 Thursday night for their second loss of the season and will look to upset a Coyotes team Saturday night which is coming off it’s first win of the season, a 5-2 road victory over the Nashville Predators.

It is hardly a secret that tonight’s game has been circled on the calendar of many Jets fans since it was announced in late May that True North Sports & Entertainment had purchased the Atlanta Thrashers and would be moving the team to Winnipeg. 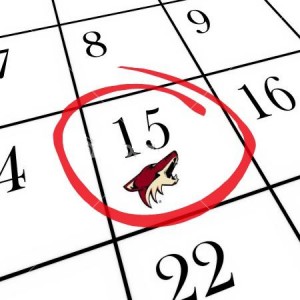 The reality is that many Jets fans still have a soft spot ( a kind choice of words) for the Phoenix Coyotes, who were formerly the Winnipeg Jets. The Jets moved 15 years ago when the team was forced to leave due to an aging arena, low Canadian dollar and lack of local ownership.

It is estimated that anywhere from 2500+ Jets fans may be making the trip down to Glendale to cheer on the new incarnation of the Winnipeg Jets.

We should be in for an entertaining hockey game tonight. For the Jets, they will be looking to simply put together a full 60-minute effort. After going ahead 2-0 early in Thursday night’s game against the Chicago Blackhawks, the Jets gave up four unanswered goals and were badly outplayed for the majority of their time in the Windy City. Although it was nice to sees steady improvements from players such as Jim Slater (who scored the first two Jets goals), Alexander Burmistrov and Kyle Wellwood (goal against Chicago), the Jets still have not found their A-game, or anything close to it in their first two games.

The numbers don’t lie. The Jets have been outscored 9-4, they have yet to score a power play goal in nine opportunities and are getting absolutely dominated in the face-off circle (Team Face-off percentage of 44.7%). For the Jets to be victorious against the Coyotes, the team’s play will have to improve in these and other critical components of the game. It’s just that simple.

Notes: Coyotes Captain Shane Doan is the only player in this game who played for the original Winnipeg Jets. Doan broke into the league back in 1995’96, the last season the Jets 1.0 played in Winnipeg. He was drafted 7th overall by the Jets in the 1995 NHL Entry Draft….. There is expected to a strong contingent of Winnipeg Jets fans at the Jobing.com Arena tonight, a game which will be broadcast nationally in Canada on CBC’s Hockey Night in Canada…..Listen To The Illegal Curve Hockey Show on TSN Radio 1290 Saturday afternoon from NOON-3 p.m. CST as Phoenix Coyotes Color Analyst Tyson Nash of Fox Sports Arizona will be interviewed….. Tyson Nash played two seasons for the Coyotes (2003’04 and 2005’06)…..

Prediction: I don’t usually make predictions on Illegal Curve, but because this is a special game, I am going to say that Jets win their first game of the year tonight by a score of 4-1.