Jets fans are not limited to the city limits. Once you pass the perimeter, and cross the borders (be they provincial or state) many Jets fans can be found. Kyle introduces us to just a few of the many who plan on returning to Winnipeg to see the Jets.

The return of the Jets and the reality of seeing that first game back has brought to mind the fact that the Jets mean something big to more than the city of Winnipeg. Jets fans are and were everywhere, and are quite numerous in the contiguous provinces and states.

In my own experience, I grew up an Oiler fan in a very small town in Saskatchewan. Given that I did most of my growing up in the 1980’s, most of the kids in town were Oilers fans, along with a few Flames fans, a couple Flyers fans and the odd Bruins and Canadiens fans sprinkled here and there. But not my little brother. He was a Jets’ guy through and through.

He bled the colours, knew the players and loved every chance we got to Winnipeg and see our cousins and a Jets game. His first (and mine) was a 4-4 tie between Buffalo and the Jets. He was hooked and I just wanted to go back when Gretzky and Co. were playing.

Keith (my brother) would always want to be Dave Ellett whenever the town kids got together for shinny. The teams would always be the Oilers kids versus the leftovers (Jets, Flyers, Habs, Bruins, etc.), so you would have Messier, Tikkanen (me), Gretzky and Fuhr (again, not many kids in town) versus Dave Ellett, Tony Tanti (my other brother), Ilkka Sinisalo and Pelle Lindberg (RIP). My brother played the same game, more or less, as Ellett and he remains his favourite player to this day.

Naturally, there was great excitement in Keith’s house when the announcements came out. He prepared his Jets chairs (two seats from the old Arena) and watched the first game from the comfort (?) of those wooden nightmares. To him, the return of the Jets rights a wrong, a sentiment shared by others, including Eric Burton of Goon’s World.

Burton, a resident of Grand Forks, ND, also remembers fondly the Jets of old, making several trips to Winnipeg to see the Jets with UND classmates and family members. Given that the Jets were the closest NHL team to Grand Forks, there was healthy competition for fan loyalty between the North Stars and Jets.  Part of the reason Burton was happy to attend Jets games was the ease of getting very reasonably priced tickets, often for under $20.

The final observations are from Brad Wentzel of Minneapolis, who is a big Jets fan and holds no grudge for Winnipeg stealing the IHL/AHL Moose from the Land of 10000 Lakes.

Wentzel, who can be found on Twitter @nhlhockeynut, remembers the days when the Jets were rumoured to be going to Minnesota, only have them end up in Phoenix. Feeling that Bettman stole the team from Manitoba, he was very pleased to hear about the return and has now focused his energy on thinking goods thoughts for Quebec City.

Pleased to hear that the team had chosen to revive the Jets moniker, Wentzel and a friend will be making the trip north in December to see the Wild take on the Jets.

Though it should come as no surprise that people are excited about the return of the Jets, Winnipeggers should take note of just how many people outside of Manitoba were happy about the team coming back. Friend of the blog AllyK00 is just one example of the devoted fans who will end up at MTS at some point this winter. Take a minute and talk to the out-of-towners and I bet you would be surprised at the stories you hear.

If you happen to see me, I would be happy to tell you about my trip to Winnipeg as a 16 year old to see the Oilers, only to end up sitting by a drunken cougar and chickening out of taking her offer to “see her room” at the Viscount Gort.

Editor’s Note:  As Kyle said there are many good stories of fans from elsewhere either planning on attending games at the MTS Centre or supporting the Jets when they come to their town(as we saw with the NHL Entry Draft in St. Paul, Minnesota). 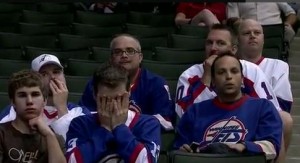