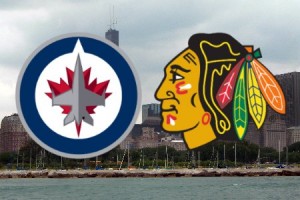 The first ten minutes of the Winnipeg Jets second game provided a tantalizing taste of what this team could become, when all cylinders are firing. Hard work in the corners, controlling the flow of play resulted in two Jim Slater goals, giving the Winnipeg Jets their first lead of this young hockey season. The second ten minutes, however, were a cautionary tale in what could happen to this team throughout the season as they face off against more talented opponents like the Chicago Blackhawks. Two Blackhawks goals, from Andrew Brunette on the power-play and on a nifty one-timer by Patrick Kane potted the score at two apiece.

The second period began where the first one left off, as the Blackhawks scored thirty three seconds in off a shot from the point by Marion Hossa. The Jets were on their heels, and needed to recapture the energy they started the game with, before the deficit grew larger and out of reach. After a power-play failed to capitalize, despite having to go to video review to eyeball a potential goal that was eventually ruled not a goal, the Blackhawks took a 2 goal lead on a shot by David Bolland that Ondrej Pavelec simply has to save. He had made the first save, the Jets failed to clear the zone, and on the next shot, it squeaked through him for a two goal Blackhawks lead. Before the second period ended, the Jets got one of the goals back, as Kyle Welwood put one past Ray Emery, redeeming himself after he tripped over the blue line on a breakaway earlier in the second period. With twenty minutes to go, the Jets were one shot away from equalizing this contest, against a much more talented Blackhawks team.

The first ten minutes of the third period was very much like two boxers stalking one another in the ring. Neither party did much of anything for fear of leaving themselves susceptible to a knockout punch. For the Blackhawks, that tactic is fine as they were the ones with the one goal lead. For the Jets, they had to pick up the pace, given that they were trailing by the one goal. When there were opportunities, the Blackhawks had the best of them, and Ondrej Pavelec had his best period as a Winnipeg Jet, making a number of key saves to keep the margin of deficit one goal. As the Jets furiously pressed for the tying goal, they ran into a roadblock by the name of Duncan Keith and Brent Seabrook, and couldn’t slip the equalizing goal past Ray Emery. The last gasp attempt went for naught and at the end of the evening’s festivities, the Jets found themselves on the losing end of a 4-3 game. For those seeking a silver lining, the Jets had a much better performance, in all aspects than the opening night jitters that were on full display on Sunday versus the Habs. The better team won tonight, but for Jets fans, there was reason for optimism at the end of the night.