Without Crosby and Malkin the Penguins come to town to take on the pointless Winnipeg Jets. 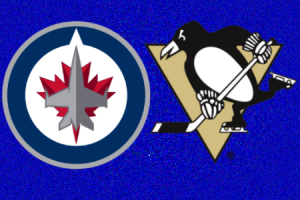 The Story: The Jets are back home from a short two-game road trip to Chicago and Phoenix with no wins and no points and no time to feel sorry for themselves as they will meet the Pittsburgh Penguins tonight at the MTS Centre.

The Jets will face an injury-depleted Pens team Monday night as forwards Sidney Crosby (concussion), Evgeni Malkin (sore knee), Dustin Jeffrey (knee) and defenseman Brooks Orpik (abdomen) did not travel with the team to Winnipeg. Unfortunately for the winless Jets, the Pens still have plenty of other offensive weapons in their roster including forward James Neal (5 goals in 6 games), forward Jordan Staal (5 points in 6 games) and defenseman Kris Letang ( 6 points in 6 games).

The Jets are coming off a colossally disappointing 4-1 loss to the Phoenix Coyotes on Saturday night, a game in which they were outshot 34-19. Jets captain Andrew Ladd scored the lone goal for the Jets, who have now scored just 5 goals in 3 games, not nearly enough offensive production for a team that is expected to have trouble scoring goals all season long.

Jets Head Coach Claude Noel may try to shuffle his roster and line combinations for Monday night’s game against the Penguins, as many of the Jets line combinations have been ineffective. The one exception to that has been the fourth line of Tanner Glass–Jim Slater–Chris Thorburn, which has provided much-needed physicality and energy to a lackadaisical Jets squad. On Saturday night, the Jets inserted Tim Stapleton and Randy Jones into the line-up and sat Johnny Oduya and Brett MacLean but it didn’t have much of an impact.

Although Winnipeg hockey fans were hoping that superstars Crosby and Malkin would be in the line-up tonight, that doesn’t mean that they won’t be treated to an exceptional hockey team. The Penguins are as fast as any team in the National Hockey League and boast speedy players Steve Sullivan, Tyler Kennedy, Chris Kunitz and the previously mentioned Letang. The Penguins are extremely well-coached (Dan Bylsma won the Jack Adams Trophy for coach of the year in 2010’11) and play an up-tempo and positionally sound game.

As far as the Winnipeg Jets go, in order for the team to win its first game of the season tonight, they are going to have to improve in all aspects of the game. The Jets have been unorganized and sloppy in their first three games and have been unable to put together one solid period of hockey thus far.

When you consider that top offensive players Evander Kane and Bryan Little have zero points combined in three games and are Minus-6 , you can see why the Jets are the only team left in the National Hockey League with not one single point.

Expect Ondrej Pavelec to start for the Jets in goal tonight, as Chris Mason played in goal Saturday night against the Phoenix Coyotes.