Had a chance to talk to the Winnipeg native and Predators forward following the Jets/Preds game to get his thoughts on the game, the return of the NHL to the Peg’ and what it means to play against the returned Jets.

We caught up with the Winnipeg native and Predators forward following the Jets/Preds game to get his thoughts on the game, the return of the NHL to the Peg’ and what it means to play against the returned Jets. 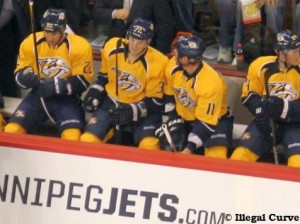 IC:  Talking with a Winnipeg guy, how does it feel to get back to the province of Manitoba and play against the Jets?

IC:  Your dad was born in Winnipeg and played 10 years in the NHL, was he in attendance tonight?

Colin Wilson:  Yup, him and about 15 other people in my family.

IC:  How many phone calls do you expect to get everytime the Predators play in Winnipeg (in years coming)?

Colin Wilson:  I expect to get quite a few.  There are a lot of people who will want to hang out and get tickets.  A lot of friends and family.

IC:  What did you think of the atmosphere at the MTS Centre?

Colin Wilson:  Amazing.  There are a few barns like that in hockey, that can get that excited for a pre-season game.  Obviously with all the hype it is very exciting for the fans.

IC:  How do you feel about your game tonight?

Colin Wilson:  I had some good puck possession but it wasn’t the game I wish I had played.  I was a bit hesitant out there, could have been better.  I’m not particularly happy with it.

IC:  What do you expect from your team moving forward?

Colin Wilson:  I believe we can.  We have great goaltending, great defence and we have a lot of forwards who are going to surprise other teams.  I think we definitely can.