Vancouver Province: This was reported three hours ago by Jason Botchford. Canucks forward Ryan Kesler underwent hip surgery last week and may miss the start of the regular season. It was obvious to anyone with functioning vision that Kesler was injured during the Stanley Cup Finals. We wish him a speedy recovery.

The Tennessean: Josh Cooper updates us on the latest news involving Nashville Predators defenseman Shea Weber and his arbitration process. This doesn’t look good. The Predators offered a Norris Trophy Candidate $4.75 million/year??? In today’s salary cap world, he is worth $7.5-$8 million I would say. 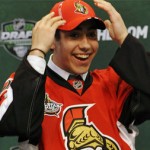 The Hockey News: Ken Campbell writes about Mika Zibanejad and how his father’s life provides him with perspective. A very good read from one of my favourite hockey writers. Remis and I were riding on the same bus as Zibanejad on the way to the draft in St.Paul and he looked liked one of the happiest guys around after getting picked 6th overall by the Ottawa Senators.

Newsday: Blake Comeau has avoided salary arbitration and has signed a 1-year, $2.5 million deal with the New York Islanders. Comeau had a career year last year and got rewarded for it.