Grand Forks Herald:  Marto inks Jets organization.  His addition is good for the depth of the St. John’s IceCaps.

Winnipeg Sun:  Jets sign former Moose King.  Looks like the Jets are keeping with the “local” theme for the AHL team as well.

Winnipeg Sun:  Shin shines with Jets tattoo.  I’m all for supporting the team, but getting a logo tattooed on my leg might be taking it a bit too far for me.  I’m happy to wear a hat to show my support.  But to each their own.

TSN:  Nabkov says he plans to play for Islanders.  But with the vote going poorly, the question is where will they be playing.…

New York Post:  Referendum loss leaves door open to possible move to Brooklyn.  Interesting that the Barclays Center only holds 14,500 for hockey meaning Winnipeg would no longer be the smallest arena in the NHL.

Globe and Mail:  Voters say ‘No’ to Islanders arena.  Hard to get people in a tough economy to agree to spend more money for a billionaire owner.

New York Times:  Nassau votes reject proposal to overhaul Coliseum.  It appears that fans have forgotten the 4 Stanley Cups in a row and just remember the futility (no playoff series wins in 17 years). 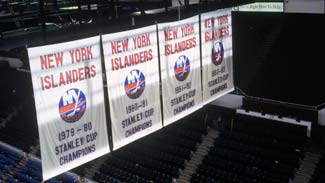 CBS Sports:  Islanders arena vote fails.  Not sure why but talk of moving the Islanders offends my sensibilities.  Here is list of cities that could be vying to be the future home of the Isles.