Five reasons why the Winnipeg Jets will make the playoffs 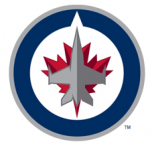 In early July on The Illegal Curve Hockey Show (Sports Radio 1290 AM), Drew, Richard and I discussed (bickered?) whether or not we thought the Winnipeg Jets would be a playoff team this season. I was the only one on the show who thought the Jets would make the playoffs in 2011’12 and I’m going to use this space to explain why. 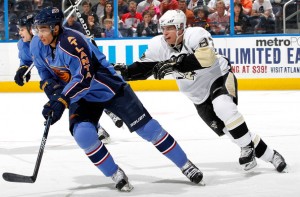 1. Youth
This is not your father’s NHL. Youth dominates now. According to NHLNumbers.com, the Winnipeg Jets are the youngest team in the National Hockey League at an average age of 26.431 (Toronto Maple Leafs are second at 26.543). In fact, Chris Mason (35 years old), Nikolai Antropov (31 years old), Randy Jones (30 years old) and Ron Hainsey (30 years old) are the four oldest players on the team and aside from Mason, are really not that old and just hit 30 recently.
Although hockey players not named Wayne Gretzky or Sidney Crosby typically hit their prime between 25-27 years old (especially defenseman and goaltenders), there are several elite young players on the Jets who are in a good position to improve on the first few seasons of their careers and take the all-important next step to stardom. The two players who illustrate this the best are soon-to-be-20-year-old Evander Kane (who turns 20 on Tuesday) and Zach Bogosian (21 years old). Both of these players are high first round draft picks who played big time minutes in Atlanta last season and are expected to be building blocks of the Jets for years to come. (We should point out that as of August 1, Zach Bogosian is still a restricted free agent, but he is expected to sign a contract in the near future).

To me, the Jets hopes of making the playoffs rest heavily on the production of these two players (and the play of 23-year-old starting goaltender Ondrej Pavelec, more on him later). Last year, in his second season, Kane produced 19 goals and 24 assists over 73 games and received plenty of first line ice time.  Kane is fast, strong and physical and has the ability to change the pace of a game with his offensive prowess. It would not be ridiculous to project that Evander Kane will score 30 goals and 60 points this season playing in a mad-hockey market like Winnipeg. This increase in production will be key for a team that is not expected to be in the Top-10 or even Top-20 in the NHL in goals scored.

Bogosian, on the other hand, took a step back offensively during the 2010’11 season, registering 17 points in 71 games (down from 23 points the previous year).  Even though Bogosian is an offensively-skilled defenseman, he actually improved his defensive play last year which is arguably more important. Now, I know what some people are saying and I’m aware that Zach Bogosian was Minus-27 last year but he was often playing against the opposing team’s best players. Bogosian’s Even Strength Time on Ice (18:24) was 26th in the National Hockey League, remarkable for a 20-year-old kid. Bogosian definitely struggled at times with his positional play, but he took on more responsibility and logged important minutes.  In a more stable environment and under the tutelage of 5-time Stanley Cup Champion Charlie Huddy, Bogosian will have a better opportunity to improve his defensive game and learn how to become a more efficient player on special teams.

The remaining 4 reasons after the jump. 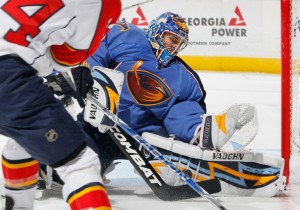 As mentioned earlier, Jets starting goaltender Ondrej Pavelec is still a young pup himself at 23 years old. Pavelec, who stands 6’3’’ and weighs 220 pounds, is perhaps the one player on the Jets 2.0 who has received the least amount of media attention in the off season and I really don’t understand why.

After starting last season with a scary on-ice incident that saw him collapse on the ice during a game, Pavelec set career marks for games played (58), wins (21) and shutouts (4), all the while playing on a team that was was wildly inconsistent and at times in turmoil. In reality, Pavelec was one of the main reasons the Thrashers were in the playoff race during the first half of the season and was one of the hottest goaltenders in the league at times (Pavelec won player of the week honours in late November, 2010)

Pavelec, who won the Calder Cup Trophy with the AHL’s Chicago Wolves in 2008, is a Top-10 goaltender in my opinion and is as fundamentally sound as it comes. Pavelec covers the ice well with his big frame and is an aggressive goaltender who has tremendous east-to-west quickness.

Make no mistake. This is a huge year for Pavelec. He is unquestionably the number-1 goalie and he’s going to be expected to carry the load for the Jets. This shouldn’t be a problem as Pavelec is not expected to start 70-75 games. Red Deer, Alberta’s Chris Mason is a veteran NHL netminder who can easily play 25-30 games if that’s what is asked of him.

You want a bold prediction? I think Ondrej Pavelec will be a Vezina Trophy candidate next year.

The Jets are the not the Vancouver Canucks or the Chicago Blachhawks when it comes to depth on the blueline but the group that has been assembled in Peg City is surely above average.  Led by the afformentioned Zach Bogosian and Tobias Enstrom, who was an early season Norris Trophy candidate in 2010’11, this corps has speed and skill in abundance. Throw in Dustin Byfuglien, Johnny Oduya, Ron Hainsey and Mark Stuart and this is a group that has physicality, experience and a year playing together. 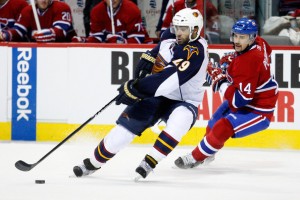 Perhaps what is most impressive are the players that Jets signed during the off season who will most likely fill the #7 and #8 roles, Derek Meech and Randy Jones.  Both of these players are not flashy but bring a winning pedigree to the table.  In the case of Randy Jones, who signed a one-year/$1.15 million deal in early July, he has the versatility to play on the power play and penalty kill.

The strength of this team is going to be from the net out and although the Thrashers gave up a lot of goals last year (3.20, 29th in the NHL) that will improve significantly this year in my opinion.

4. The Eastern Conference is not that good

Yes, I know that the Atlanta Thrashers finished 12th in the East last year but the teams that finished directly ahead of them (New Jersey Devils,Toronto Maple Leafs, Carolina Hurricanes) were not that good either. Carolina only came close to making the playoffs because they won 7 of their last 10 games and New Jersey began the season a depressing 10-29-2.

Now, before I continue I will say this. The Buffalo Sabres (Robyn Regehr, Christian Ehrhoff, Ville Leino), New York Rangers (Brad Richards) and Washington Capitals (Tomas Vokoun, Roman Hamrlik and Joel Ward) have gotten better based on their off-season acquistions but I cannot say the same for the rest of the Eastern Conference, including the Montreal Canadiens and Philadelphia Flyers, who are teams that I believe the Jets are better then.

Take the Montreal Canadiens. The Habs finished 6th in the Eastern Conference last season with a 44-30-8 record (96 points). They played a significant portion of the season without top defensemen Andrei Markov and Josh Gorges yet still managed to be a top club in the East led primarily by Carey Price, who should have been a Vezina Trophy candidate last year (38 wins). I commend Jacques Martin ( a coach I really respect) and the Canadiens for that but I don’t seem them duplicating a season in which they relied too heavily on Price while players like Mike Cammalleri, Brian Gionta and Scott Gomez strugged to score goals on a nightly, even monthly basis (in Gomez’s case).

The Jets will play this season in the Southeast Division (the Jets will move to the Western Conference for the 2012’13 season) which means they will play six games against each of the Washington Capitals, Tampa Bay Lightning, Carolina Hurricanes and Florida Panthers. In my opinion, the Jets can win 20 of those 30 games or two-thirds which will be a important determinant in their ultimate success or failure in earning a playoff spot.

Even though the Jets first regular season game at the MTS Center on October 9th against the Montreal Canadiens is expected to feature a white-out, fans in Winnipeg want to wear all-white to a playoff game in April.

I’m not expecting those fans to be disappointed. 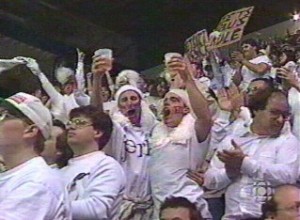