Moose stymied by Griffins in 1-0 shutout

The Moose took on the Grand Rapids Griffins (AHL Detroit) Thursday night at Bell-MTS Place. The Moose sit second overall in the AHL after the Toronto Marlies impressive 15-0-1 streak, but they remain first in their division, and in the Western Conference. Jamie Phillips got the start in goal – his 5th of the season.

Brendan Lemieux created a good opportunity, going down the right wing with speed and cutting hard to the net – an opportunity he’d create more than once in this game. Shortly thereafter, Mason Appleton came down his off-wing (the left side), made a nifty move to cut to the middle, and flipped the puck to himself for a shot from the slot. The Griffins nearly got an easy goal, as Jamie Phillips stumbled briefly, but the Griffin forward mishandled the puck on the wall and Phillips recovered to take the change away. The Moose nearly opened the scoring as Chase De Leo made a nifty pass out front to Cam MacLise, and he ripped a shot off the pipe and out. The Moose got into penalty trouble with Buddy Robinson (tripping) and Jan Kostalek (boarding) each taking penalties to put Moose down 5-on-3, but they were able to kill it off. Jamie Phillips made a highlight reel save on what seemed a sure goal, coming across the crease to make a wonderful right pad save. The first ended in a scoreless tie, with shots at 13-9 for the Griffins.

Phillips opened the second with another great save when the puck squired out front to a wide open Griffins forward, but Phillips was able to deny him by quickly extending his right pad. After a pass bounced off Michael Spacek’s foot at centre ice, Griffins’ sniper Matt Lorito picked up the puck, came down the left wing and fired a dagger over the left shoulder of Phillips and off the back bar to make it 1-0 Griffins. 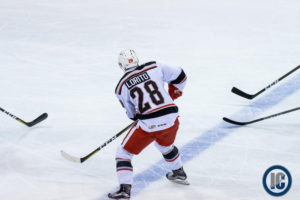 Not long after, Cam MacLise appeared to score the tying goal off a deflection, but the referee immediately blew it down on account of a high stick. Buddy Robinson had a great rush and found Brendan Lemieux driving the net, but goaltender Jared Coreau made a great reaction save to keep the lead. On a Moose powerplay, Lemieux was able to steal the puck from goaltender Coreau behind the net and nearly wrapped it around to tie the game. Jansen Harkins had another good chance on the same sequence, up a juicy rebound in front, but he slid it just wide on the backhand. The Griffins outshot the Moose 15-13 in the period, and went to intermission with a 1-0 lead.

J.C Lipon took a boarding penalty at centre ice early in period, giving the Griffins their fourth powerplay of the night, but the Moose were again able to kill it off. Brendan Lemieux then made another strong rush, driving wide and cutting to the net, and was able to draw a penalty. Unfortunately for the home team, their powerplay was ineffective, as they struggled to move the puck, or generate any chances. Francis Beauvillier almost took the fifth minor penalty of the game, but he got away with a goalie interference penalty after knocking down Coreau behind the net. With just under three minutes left, Sami Niku had a golden opportunity from the slot with a partial screen, but he fired it just wide on the blocker side. With just over a minute left and the Moose still down by 1, Patrice Cormier found the puck behind the net and made a nice wrap-around bid, but he was denied by Coreau. The Moose pulled their goalie late, but were unable to generate any pressure to speak of and went down meekly in that final minute.

-Brendan Lemieux was prominent in this game, with 5 shots on goal, including 4 decent scoring chances. He also made a few questionable decisions with the puck – a little tunnel vision late in the second, failing to see a few good passing options; a poor giveaway in the defensive zone; and an ineffective rush in the dying seconds of the game, when he urgently needed to move the puck up the ice. Lemieux’s abilities are clear – his skating has improved, he can handle the puck, and he has a good shot, but at this point, his hockey sense may be what’s holding him back

-Jamie Phillips was brilliant tonight. He made 37 saves, and at least 5 on grade-A chances. At 6’3, he has long legs, and very quick feet, which makes him hard to beat down low. The only one that got by him was a high shot where he was either off his angle a bit, or not standing up as much as he should/could have been. Overall, a stellar performance though.

-Sami Niku wasn’t quite himself tonight. He missed a few passes, icing the puck, didn’t rush the puck much, and didn’t move the puck effectively on the powerplay. Fortunately, this was an exception for him this year, as he’s been a tremendous puck distributor all year.

-Mason Appleton had a lot of touches on the puck, but like Niku, didn’t make a lot happen outside of the one nice chance in the first period. He has all the tools – size, skating, puck skills, vision/passing, a nice release, and with how consistent he’s been this season, we sometimes forget that he’s only 51 games into his pro career. With Roslovic and Petan up with the Jets, Appleton leads the Moose in scoring by 5 points

-Michael Spacek had some opportunities tonight on the powerplay off his patented one-timer, but wasn’t able to capitalize. He didn’t have many chances or touches at even-strength, as an overall poor team effort extended to him as well. After starting the season with 5 points in his first 16 games, he’s producing at a pretty nice clip now for a rookie with 18 points in the last 29 games. The rise in production coincides with some time on the powerplay, and a bigger role in the top-6, whereas he was confined mainly to a 4th line role early in the year.