After spending five years with the Winnipeg Jets as an assistant coach Pascal Vincent had the opportunity to take over the reins of the Jets AHL affiliate Manitoba Moose in their sophomore year after relocating from St. John’s.  Now in his second year as head coach of the Moose the product of Laval, Quebec has seen his team jump from a 29-37-5-5 squad in 76 games last season to one that had already surpassed that number of wins in just 44 games in 2017-18. 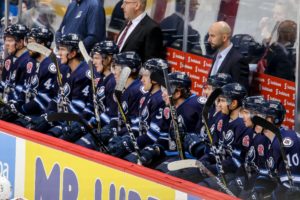 At the end of December the AHL selected the four coaches who would represent the Atlantic, North, Central and Pacific divisions based on their team’s winning percentage.  Not only did coach Vincent have his team at the top of the central standings, they were atop the entire AHL with a league best .773 winning percentage.

Prior to leaving on the nine-game road trip the Moose were dealing with a number of missing players either due to recall up to the Jets (Roslovic, Hutchinson, Lemieux), injury (Schilling, Robinson, Stoykewych, De Leo, Beauvillier) and suspension (Sgarbossa) and the team hit their biggest skid of the season losing four of five games at Bell MTS Place. 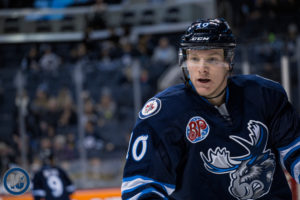 For a team that hadn’t lost many games consecutively it was a stumble, one that was obviously understood within the context of the missing personnel, but nonetheless a foreign notion with a team that had been on pace for a historic AHL winning percentage.  However, for coach Vincent it was an opportunity to see players playing within different roles and being given different opportunities. At the same time he understood regardless of the players on the ice that the team got away from what had brought them success throughout the season. “We kinda lost, for a short period of time, that identity that we had.  It was pace, speed and worth ethic.  It’s not that we weren’t working hard but we lost sight of what we needed to do every single shift in order to be successful.”

In addition to his first ever AHL All-Star appearance the Moose coach had another first to knock off his coaching bucket list.  The road trip for the Moose began in Belleville where they handed the Senators a 4-1 defeat with the next two games in Laval, Quebec which was where the Habs relocated their AHL franchise.  It also happens to be the hometown of Pascal Vincent and gave him the opportunity to coach in front of friends and family not ten minutes from where he grew up, for the very first time.

“It was very special.  It was the city I grew up in.  Not too far from where the rink was built I used to play hockey with my dad and my brothers outside when it was -20.”  While he has been to Montreal with the Jets he acknowledged that it wasn’t easy to accommodate all the family and friends who wanted to attend a game when he was an assistant coaching with Winnipeg.  However, in his hometown of Laval tickets were more readily available and more of his family and friends could witness his life as a coach.  “That’s the biggest thing.  My two brothers and close people to the family were there and I was happy to share that experience with them.”  In addition to the personal satisfaction of coaching in front of family and friends his squad handed the Rocket back to back defeats.

One concept that coach Vincent discussed is the idea of how this team is not a collection of individuals but instead a group working towards a collective goal.  “They believe they can win every game and it doesn’t matter who is in the lineup.  We’re so much bigger as a group then we are individually.  We work well together.  There is a good leadership group.  But it’s more than that.  We are part of something bigger than just one or two individuals.  This team is all about the team.  There’s no real ego.  I truly believe that’s why we are having success because we trust each other, we’re not afraid to say the real things, we just don’t play games.  We just go out there do our best and believe in each other.”

While folks tend to focus on the Jets prospects like Jack Roslovic, Mason Appleton, Nic Petan, Sami Niku, Brendan Lemieux, etc the concept of a collective team effort stretches all the way from the top end to the role players.  One such player that coach Vincent praised for his selflessness and dedication to the team was Darren Kramer.  “This guy is a special man.  I don’t think I’ve seen too many men like him.  He’s putting everything aside for the sake of the team.  He’s practicing right, he’s a big voice around the team, he’s very positive, he’s a voice of common sense in the room.  He’s very respected around the team.” 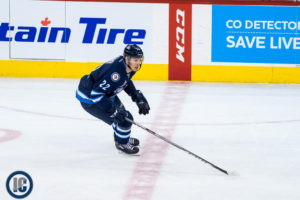 The coach went on “For him to be the way he is this year, and we don’t talk about this enough, it’s amazing.  This guy is absolutely amazing.  It’s all about the team.  He puts the team first.  It starts with guy’s like him.  The players see it.  It’s not easy, he’s not playing a whole lot, and when he plays he’s not playing big minutes.  He’s just positive, been a real help for the coaches.  I hope people can see it.  I don’t think there are any words to explain everything that he does for this team and how big an impact he has around the team.  He is a big piece of our team, no matter what”. 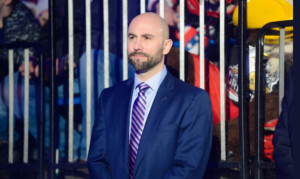 When asked what was the most memorable part of the two-day experience coach Vincent, while acknowledging that it was an honour to “represent the organization and getting a chance to meet different people from around the AHL”, also didn’t hesitate to add that his personal highlight was a chance to meet and talk with former AHL player Craig Cunningham.  For those unfamiliar with Cunningham’s story he was a forward in the Coyotes system whose Tucson Roadrunners were getting ready to play the Manitoba Moose back on November 19th, 2016 when he suffered sudden cardiac arrest (Bob McKenzie of TSN covers Craig’s story which you can read more about here).  This was the first time the Moose bench boss had a chance to sit and talk with Cunningham since the incident in Tucson as Craig was in Utica acting as an honorary captain for the All-Star challenge.  “For me to have a chance to sit down with him and have a good chat, going over what he is going through and having the chance to be there with him, one on one, that was to me, my highlight of the weekend to be honest with you, having the chance to meet Craig Cunningham.”

Following our conversation the Moose re-started their nine-game road trip which will see them play 17 straight against the Central Division.  They began by defeating the IceHogs in Rockford and Admirals in Milwaukee and have points in thirteen straight on the road (12-0-1) and sit with an overall record of 31-10-3-2.

While this team is on pace to eclipse the most ever wins for a season (set by the Moose 1.0 back in 2008-09 when they won 50 games in an 80 game season) they are maintaining a similar approach to one adopted by the parent club.  They are not even looking too far down the road towards the playoffs.  “We want to stay in the moment.  Make sure that we just take care of the next game.  That’s been our approach the whole season.  Just take care of your next game and we’ll go from there and we’ll adjust.  There’s always a way to get better.”