Moose reflections ahead of the AHL All-Star weekend.

After a recent slide that saw Manitoba go 1-4-1 during a home stand at Bell MTS Place the Moose left on a nine game road trip.  Moose captain Patrice Cormier told us last Monday just prior to leaving Winnipeg about how the road had been good to this team, that they were able to build good chemistry on a previous California trip and that they were hoping to do the same this trip.  All season long they have been an excellent road team and that didn’t change in the first three games to kick things off last week which saw them beat 4-1 Belleville on Wednesday then Laval back-to-back on Friday (4-1) and Saturday (5-2). The Moose are now 17-4-1 in 22 road games this season and have points in eleven straight on the road (10-0-1).

During the past week the team made some recalls from the ECHL, played musical goalies but in their final game before the All-Star break this Moose squad was closer to the lineup we have grown accustomed to seeing this season.  Mike Sgarbossa was back from suspension, Brendan Lemieux/Michael Hutchinson from their recall to the Jets and previously injured players JC Lipon/Peter Stoykewych were back playing.  The only regulars out of the lineup are Jack Roslovic who has played just one game since he was called up to the Jets back on December 30th, Chase De Leo/Francis Beauvillier who were both injured in a game against the Texas Stars on the 19th and Tucker Poolman who was just called up on the 24th.  Poolman’s game had really elevated the last four or five contests he played in the AHL which included him scoring his first AHL goal. 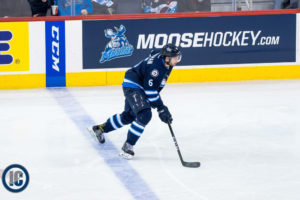 In the three wins to kick off the road trip Eric Comrie returned to form making 72 saves on 74 shots in two wins while Michael Hutchinson, playing in his first game since January 8th, made 32 saves on 34 shots in his win.  Even though Hutchinson hadn’t played in almost three weeks he still sits second in the league in save percentage (0.942) and third in goals against average (1.95).

Individually this team has had a lot of success all season long and even though the team faltered a bit since Jack Roslovic was recalled by the Jets back on December 30th, a number of players have stepped up in his absence.

Mason Appleton, who was selected to replace Roslovic in the All-Star game, leads the team in scoring with 41 points (15 goals 26 assists) in 44 games.  He was the first player on the team to crack the 40 point mark, leads all rookies in the points race and sits sixth overall in the scoring race.  Not bad for a player who spent his first few games this season playing on the fourth line for the Moose. 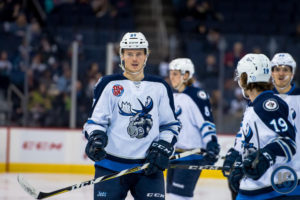 There has been a lot of talk about Nic Petan lately as someone who could garner interest in an NHL trade but regardless of the outside distractions he isn’t allowing it to impact his play on the ice.  During the pre-game chat on Saturday night Moose assistant coach Eric Dubois told play-by-play voice Mitch Peacock about how Petan has played with more ‘pace’ over the last month. Petan’s points streak is now at four games (1G 7A) and overall this season Petan has 10G 29A for 39 points in 37 games for Manitoba.

Smooth skating Finnish rookie defenceman Sami Niku has 8G 21A for 29 points in 44 games.   Last season the top defemceman on the Moose (Kevin Czuczman) had 32 points in 76 games.  Niku continues to lead all rookie D in scoring (by 8) and is tied for third among all defencemen.

A trio of veterans are having a significant impact on this Manitoba squad this season.  Buddy Robinson is having a career season with 18 goals and 18 assists for 36 points having already surpassed his highest goal and points totals.  Moose captain Patrice Cormier has 17 goals (in 43 games) this season and is one goal away from his career best 18 (in 56 games) which he had in 2011-12.  Another veteran having a career year and one who has helped to solidify the Moose on the back end is Cameron Schilling who is already up to 24 points (5G 19A) in 40 games which is only two points back of what he had last season in 72 games.

The majority of the Moose players are now off for the AHL All-Star break. The exception is bench boss Pascal Vincent who will head to Utica, NY with Mason Appleton, Cameron Schilling and Michael Hutchinson and who will represent Manitoba as All-Stars for the central division. The skills competition is today and the All-Star game is on Monday.

The team will reconnect in Rockford, Illinois to prepare for game four of this nine game road trip. The push for the playoffs begins with the IceHogs on Friday, February 2nd. As Mitch Peacock said during the broadcast on Saturday it will be the first of 17 straight games against the central division.

One area that this team has spoken about a need to clean up is their discipline.  They are the fourth most penalized team in the AHL (208 times shorthanded in 44 games) and even during this three-game win streak they took 14 penalties.   It helps that they have the fourth best penalty kill in the league at 86.1% but it clearly an area that they will need to address as they inch closer and closer to their first playoff berth since relocating from St. John’s.

Overall this Moose team is back to their impressive form sitting second in the entire AHL and are up to 29-10-3-2 this season which is impressive when you consider they are doing this without one of the most dynamic players in the AHL in Jack Roslovic.  Just to put their 29 wins into context the Moose have matched their win total from all of last season and still have 32 games left in the 2017-18 campaign.