Moose show they can handle the Heat with 4-1 win

The Moose were back home for the first time since March 4th as they had been out on a seven-game road trip.  Tonight’s game against the Heat marked the first of eight back at Bell MTS Place.

1st
– The Moose controlled play for the most part in the opening frame but aside from some posts no scoring;
–  JC Lipon and Ryan Lomberg dropped the gloves early in this one;
– Heat lost two defenceman to injury although they got one back;
– Manitoba held a 12-3 shot edge after 20 minutes.

2nd
–  Quick start and good pressure by the Moose led to Jan Kostalek scoring the opening goal of the game;
–  Assists to Cormier and Appleton;
–  JC Lipon chased down a chance, put the shot on net which Gillies saved but put off his Dman and in; 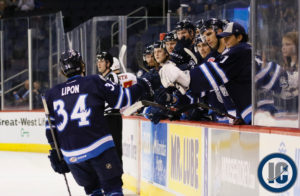 –  Nic Petan off a perfect set up by Appleton shorthanded gave the Moose a 3-0 lead;
–  Assists to Appleton (obviously) and Schilling.
–  Shots were even this period at 11 which means the Moose were up 23-14 after 40 minutes.

3rd
– Not really much doing in the final frame;
– Moose controlled play early in the period for long stretches in the Heat zone;
– Eventually the Heat started to apply some pressure;
– They did get one goal late in the 3rd to break up Phillips shutout bid but it was too little too late;
– Buddy Robinson’s 25th goal of the season into the empty net sealed the deal
– Shots favoured the visitors 8-7 in the final frame and ended 30-22 for Manitoba.

Notable:
–  Mason Appleton got his 39th assist of the season which is a new Moose rookie record;
–  Appleton also picked up his 40th assist which leaves him one point shy of 60;
–  JC Lipon set a new career high for goals as he scored his 15th of the year.

Final Thought:
With the Wolves nipping at their heels in the standings the Moose handle the Heat (although its not warm in Winnipeg) with tonight’s 4-1 win over Stockton to improve to 39-19-4-4.

Saturday, March 24th at 7 pm against the Stockton Heat