Brendan Lemieux expected to miss 5-14 days after being cut during a game. 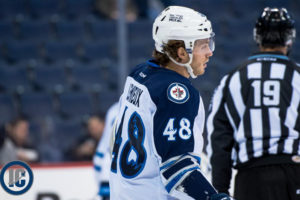 Second year pro forward Brendan Lemieux was cut in the 2nd period of the Manitoba Moose game last night in San Antonio.  As soon as it occurred he skated to the Manitoba bench, was attended to by the Moose staff and ushered right off the ice.  While his team went on to win the contest 3-2 in OT the physical forward did not return to the game.

Today we are learning from voice of the Moose Mitch Peacock who spoke to Moose head coach Pascal Vincent that: