Note:  It was a busy Saturday of practice as the Jets hit the ice at the IcePlex to get prepared for today’s game against the Stars.  We learned that Lowry, Scheifele and Enstrom could play and also learned that Dmitry Kulikov will be sidelined eight weeks as he requires back surgery.  Remember it is a 6:30 pm puck drop so morning skate is at 9:30 am today at Bell MTS Place.  Stay tuned for the Jets pre-game report.  Stay tuned throughout the day for any and all Jets news and updates via Twitter | Facebook | Instagram.

Note II:  The Moose were in action last night for the third time in four nights dropping a wild one in Cedar Park 6-4 to the Stars.  The tour in Texas finishes off this seven-game road trip in San Antonio on Tuesday night.  It’s a travel day for the team.

Winnipeg Sun:  Jets could have three key players back Sunday but Kulikov out long-term.  The Jets roster could get the boost considering this squad has been somewhat piecemeal for quite some time.

Winnipeg Free Press:  Jets could lose Kulikov for the rest of the season.  (Paywall).  With Trouba back in the fold and Enstrom set to return it seemed like the defence was just getting back into early season form.  Tough loss for the Jets as you can never really have too much depth on the backend. 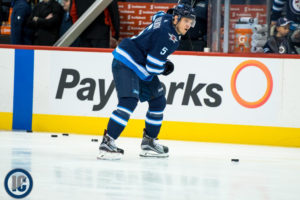 Winnipeg Free Press:  Lowry, Scheifele, Enstrom feel ready to get back in Jets lineup.  (Paywall).  We will know soon enough which of these players (if not all) will be infusing the Jets roster.

Sportsnet:  Patrik Laine has Jets looking like perennial contender.  Hard to believe he is only 19 years old.  Can only imagine what he will be capable of doing in a few years.

Illegal Curve:  Brendan Lemieux is expected out of Manitoba Moose lineup 5-14 days.  A couple of nights back the forward was cut in the 2nd period of the game against the Rampage.  While he was attended to quickly his coach has decided to hold him out to allow it to heal.

Topics: Jets start a six game homestand with a 6-2 win over Chicago, Should the Jets rest players like the Predators are doing, Jets/Stars Preview, Does Dustin Byfuglien get unfairly criticized, Glen Gulutzan’s expletive filled rant to the Flames