Moose burnt by Heat as they drop a 3-1 decision

The Moose were back home for the first time since March 4th as they had been out on a seven-game road trip.  Tonight’s game against the Heat marked the first of eight back at Bell MTS Place.

1st
– It was the opposite start from what we saw on Thursday as the Heat brought the heat to start this game;
– Early in this one the Heat had a goal disallowed due to incidental contact but scored again shortly thereafter;
– Moose lost Cam Maclise (returned) and Mike Sgarbossa (did not return);
– Stockton held a 14-8 shot edge after 20 minutes.

2nd
– The Moose came out with a bit more verve to start the middle frame;
– Buddy Robinson had a solid chance shorthanded but his breakaway got broken up;
– Heat went the other way and Brett Pollock went bar down to give the visitors a 2-0 lead; 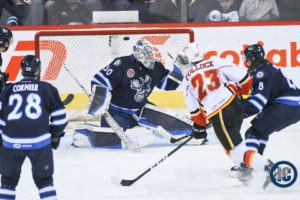 3rd
– Early in the final frame Sami Niku made it a one-goal game snapping home a Cam Maclise pass;
– It was his 14th goal of the season.
– Heat goalie Jon Gillies was excellent and stymied many of the Moose chances as they tried to tie it up;
– Shots were even at 12 apiece and finished up 34-30 for the heat.

Final Thought
The Moose lose drops them to 39-20-4-4 but they caught a break as the Wolves also lost tonight.

After losing Mike Sgarbossa in the 1st period and Charles-David Beaudoin in the 2nd the Moose bench boss didn’t have updates on either player.

They lost Nic Petan in the previous game against Stockton and today coach said “We hope for Monday.  If not, certainly hope for Wednesday.  But he’s probably from all the guys that we know they’re injured, he’s probably the closest one to come back.”

Two players who have been out longer are Brendan Lemieux who was cut in the arm during this past road trip and Julian Melchiori who is dealing with a concussion.  “Nic Petan is the closest one, Brendan should be the second next, hopefully Toronto, so next weekend.  Melchiori has to go through the process of concussion and so we’re going to be careful with him.  We’re gonna take our time and when he’s gonna be ready.  So it could be a week, could be two weeks, could be three weeks, we don’t know.  Depends on how he feels on the ice, with his workouts off the ice first, and then going on the ice by himself, then he’ll practice with the team and we’ll go from there”.

Monday, March 26th at 7 pm against the Rockford Icehogs.