Breaking down the 4-3 Moose win.

The Moose got back in action today at the MTS Centre after an extended 9-day break. They took on the bottom-dwelling Iowa Wild (Minnesota) in their first of 8 match-ups on the season. J.C Lipon made his return to the Moose lineup after missing the past 6 games. 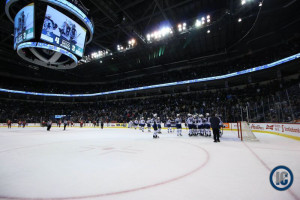 In the early going, Josh Morrissey gave the puck away in the neutral zone, sending the Wild in 2-on-1, but Eric Comrie came up with a big save to keep the score 0-0.

After a Jan Kostalek give away, Brett Sutter took off on a breakaway, but Eric Comrie was able to make a great glove save to keep the game tied.

After a shot was blocked in the Moose zone, the puck fell onto the waiting stick of Dylan Labbe, who beat Comrie from the slot to put the Moose down 1-0.

After 1 period, the Moose were down 1-0 and out-shot 16-8, with the Wild holding a clear edge in play. Eric Comrie was the star of the period.


With the Moose on a 5-on-3 powerplay, Nic Petan feathered a short saucer pass to Josh Morrissey, who picked the top corner of the net with a wrister, tying the game at 1.

Just 36 seconds later, Nic Petan fed a hard pass into the slot, which was deflected by Chase de Leo and managed to squeek by Jeremy Smith, putting the Moose up 2-1.

After some pressure in the offensive zone, Scott Kosmachuk made a cross-ice pass to Austen Brassard, who fired a nice shot from his off-wing into the top of the net, putting the Moose up 3-1.

Jordan Schroeder came in on Julian Melchiori and snapped a wrister from the high-slot which beat Comrie blocker side. 3-2 Moose.

With the Moose already down a man, J.C Lipon made an innocent forecheck in the Iowa zone and inadvertently tripped up the goaltender, sending the Wild on a 5-on-3 powerplay; on the ensuing sequence, the Wild controlled the puck in the Moose zone, and Grayson Downing walked in from the right, got a few cracks at a puck and was able to tie the game at 3.

With a few minutes left in the second, Scott Kosmachuk came down his off-wing and let a wicked wrister go from the left face-off dot, beating Smith on the far side and putting the Moose back up 4-3.

The 3rd period was a see saw affair which saw both teams trade chances but neither really get a chance to open it up. The Moose had 11 shots while the Wild had 10.  Eric Comrie may have saved his best save for last as he stopped the Wild in tight and then got the help of his post to keep Manitoba up by one.  The Moose closed out 2015 with a big win that sent the 13,774 fans in attendance home happy.

Nic Petan – a wizard on the powerplay, Petan created each of the Moose’s first two goals with great vision and soft hands. He’ll likely continue to pile up points as long as he’s playing at this level.

Scott Kosmachuk – He set up Brassard’s goal with a great cross-ice feed, and then put the Moose ahead on a play (a shot) which few others are capable of making. His game is showing signs of life, with 7 points in December.

Josh Morrissey – He got the Moose back in the game with a great powerplay snipe, as he snuck into the slot and got his stick in good position to receive Petan’s pass. He looked very confident and engaged in the play.

Eric Comrie – Was sound all night.  Would probably like to have that second Iowa goal back but made save after save (41 total) and his 15 in the 1st period allowed the Moose to stay in the game.

Jay Harrison and Thomas Raffl sat out today’s game with injuries. While Raffl’s broken jaw is still weeks from healing, he may try to play soon (with chin protection). Harrison is day-to-day.