Recapping the 4-3 shootout loss by the Moose.

The Moose renewed acquaintances with the Iowa Wild (AHL Minnesota), whom they beat 4-3 on New Year’s Eve. After a tough start to the season, the Moose are now on a bit of a tear, with a 4-2-1 record in their last 7, and 4-0-1 in their past 5 at home. 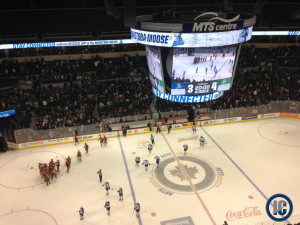 Just over 5 minutes into the game, with the Wild making a line change, Kelly Zajac and Darren Kramer broke in 2-on-1; Zajac fed a smooth pass through a defender, back-door to Kramer who chipped it past Leland Irving to put the Moose up 1-0.

With 5 minutes left in the first, Darren Kramer collected a rebound in the slot, spun and fired a shot on net, and Jimmy Lodge poked home the rebound to put the Moose up 2-0.

With 2 minutes left in the first, Kurtis Gabriel took a shot from the slot which ticked off Andrew MacWilliam (who was crouched, trying to block the shot), and went high blocker on Eric Comrie.

The first period ended with the Moose up 2-1, and shots tied 12 each. The line of Kramer-Zajac-Lodge scored both goals and looked great all period


Early in the second, Wild leading scorer Christopher Bertschy came in 2-on-1 and made a nice tic-tac play with a teammate, but missed the empty net, keeping the Moose up 2-1.

Chase de Leo picked off a clearing attempt in the offensive zone, circled wide, and fed Nic Petan, who took a little spill as he fired and just missed a wide open net.

With a traffic jam in front of the Iowa goal, John Albert fired a wrister from the point which hits Patrice Cormier and squeeks by Leland Irving, putting the Moose up 3-1.

With a minute left in the second, and the Wild on the powerplay, Tyler Graovac snuck into the slot, took a quick pass from behind the net, and beat Comrie high glove. 3-2 Moose.

After a giveaway by Julian Melchiori behind the Moose goal, Wild captain Maxime Fortunus pinched in from the point and had a puck squirt to him at the side of the net, which he backhanded in past an unsuspecting Eric Comrie, tying the game at 3.

With 3 minutes left, and the Moose on the pk, Eric Comrie got out of position on a wrap around, but Brenden Kichton was just able to cut the play off at the net, saving a goal

With two minutes left in OT, Scott Kosmachuk sent Ryan Olsen in on a breakaway; Olsen beat the goaltender, but not the right post.

With just under a minute left, the Moose had several good chances to end – with most of the (6) players on the ice ended up in front of the Wild goal, Austen Brassard fired a back-hander just over the net.

In the shootout, Zack Mitchell scored on a quick shot, low glove, and Tyler Graovac faked a slapper and went backhand, five hole; Scott Kosmachuk tried an unsuccessful forehand deke, while Nic Petan came in and wrong a shot off the right post.

Darren Kramer – He had 1 point on the season prior to tonight, and tonight had the Gordie Howe hat trick – 1G, 1A and a fight. A nice game for a guy who normally makes most of his contribution with his knuckles.

Nic Petan / Scott Kosmachuk – Both showed flashes of skill and created some nice scoring chances. Petan set up shop behind the net on a few occasions, biding his time until a teammate could get open; Kosmachuk was skating particularly well today, showing some dangles and a desire to attack the net.

Jay Harrison and Thomas Raffl once again sat out. Each of them are a week or two away from game action.