Coming off the All-Star break the Moose split a pair of games on the road to kick off the schedule and are back in Winnipeg for six straight contests beginning with tonight’s game against division rival Chicago.  This is the second of three straight games against the Wolves and is the seventh of 12 games the two organizations will play in 2019-20. 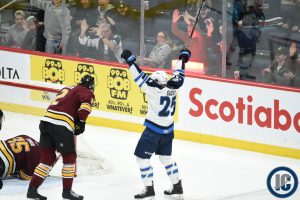 Jets 2018 2nd rounder David Gustafsson was finally healthy enough to make his AHL debut.  He said in advance of the game that he was concerned with rust but in his first game at Bell MTS Place since December 5th he looked solid.  Manitoba got off to a good start in a must-win game outshooting Chicago 7-2 early on thanks in part to an early power play.  Logan Stanley and Manitoban (but playing for the Wolves) Jermaine Loewen went toe to toe and both were given game misconducts which meant the Moose were down to five D. Newly signed Danny Moynihan made it 1-0 for Manitoba.

The middle frame saw the visitors score two straight to take a 2-1 lead which the Moose would equalize when Michael Spacek buried a shot that bounced off the backboard and straight onto his stick.

A late 3rd period power play would result in CJ Suess putting home his 12th goal of the season to give the Moose a 3-2 lead and that is exactly how this one would end.

Danny Moynihan playing in his first game with the Moose scored in his debut which was his first AHL goal.  He has a remarkable story after taking a year off from hockey due to a heart condition before returning this season.

The Moose are back in action tomorrow night for a re-match with the Wolves in their 20th anniversary game which will feature the retirement of Jimmy Roy’s number as well as a Moose throwback jersey.