The product of Sioux Lookout, Ont saw his number raised to the rafters.

It was quite a night for the Manitoba Moose as they raised Jimmy Roy’s number 21 to the rafters of Bell MTS Place ahead of their game against the Wolves.

Roy is the Director of Player Development for the Moose parent club Jets and has been in that role since the team came back to Winnipeg in 2011-12.  Before that the Sioux Lookout, Ontario product spent nine seasons with the Moose here in Winnipeg starting in 1997-98 and holds a number of team records.

Chairman of True North Sports & Entertainment Mark Chipman presented him with a gift during the pre-game ceremony. 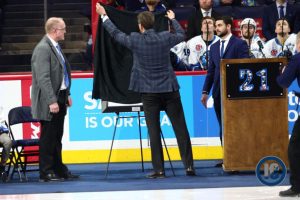 He spoke for a few minutes thanking his parents, family, friends, teammates and fans for their support. 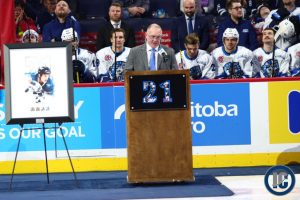 Current Moose captain Peter Stoykewych and former Moose captain Mike Keane were the two chosen to help get the jersey to the top of Bell MTS Place. 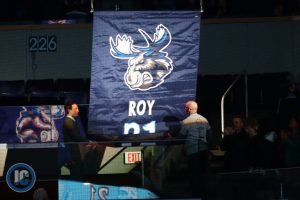 Then he watched as his jersey was raised up to become just the second Moose uniform in the rafters alongside the aforementioned Mike Keane. 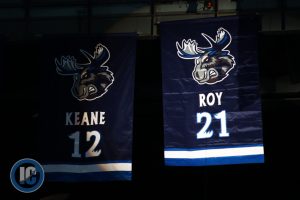 In the 1st period intermission we had a chance to chat with him about what this honour meant to him.

Quite an evening for the hard-working Moose legend.