The Moose came into tonight’s game having won two of three games coming off the All-Star break and following last night’s 3-2 win over the Wolves they were looking for a home sweep against their division rival. 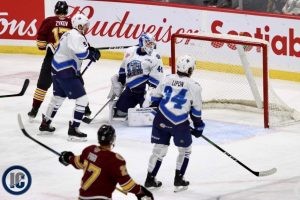 Prior to puck drop the Moose honoured currently Jimmy Roy, who is the Jets Director of Player Development and a player who spent nine seasons playing for the Moose by raising his number to the rafters.

The difference in the game would prove to be a Chicago power play which gave them all the offence they would need in the game but which came in the 1st period.  The Moose came really close at the end of the opening period as CJ Suess just couldn’t bury a Kristian Vesalainen pass across.

Despite having a shot edge in the middle frame neither side could solve the other’s netminder as both Dansk and Berdin played well and kept every shot out of the net.

In the 3rd Dansk made a ridiculous save on Brent Pedersen to keep his team up by one and that would prove to be all the offence they would need although Chicago would add a late empty net goal to seal the deal.

The Moose will be off on Saturday.