Recap of the Moose and IceHogs game.

After defeating the IceHogs last night it was a quick turnaround for both squads as they met in an afternoon contest at Bell MTS Place.  Both teams knew how important the points were in an incredibly tight playoff race which began the day with five teams vying for the fourth and final spot in the Central and only five points separating fourth from eighth.

After losing their entire left side (Harkins, Dano, McKenzie & Poirier) between the last road game and during practice this past week the only change from last night for Manitoba was in net as Mikhail Berdin spelled off Eric Comrie.

– The Moose again got out to a quick start not allowing an IceHogs shot through the first 8 minutes of the game;
– Manitoba had a 5-0 shot edge to open the game;
– Felix Girard ripped one off the post in the 1st but that was as close as Manitoba would come in the 1st;
– A Moose miscue in the 2nd allowed the IceHogs leading scorer (Peter Holland) to rip one upstairs for the 1-0 lead;
– I’ve become a bit of a broken record already but Mikhail Berdin is worth the price of admission;

This was the Berdin play I tweeted about earlier. pic.twitter.com/3k60fpqzqI

– Rockford took a penalty with just over seven minutes to go in the 3rd;
– Seth Griffith delivered a beauty pass to Mason Appleton who one timed to tie the game;
– The Moose continued to push but this game would need OT;
– Mason Appleton got his legs moving in the Moose zone, rumbled into the IceHogs end and got a decent chance on net;
– Luckily for the Moose fans in the building Michael Spacek followed up on the play, made a nifty move and won it in OT.

It was a huge game for Mason Appleton, who was playing in his 100th AHL game, with the goal and assist in the win (took six shots). 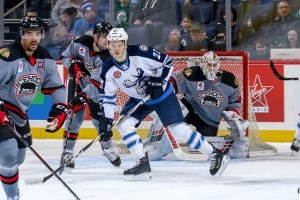 That win was the 100th victory for Moose head coach Pascal Vincent.

Now that the other Central games have ended (Texas won & Milwaukee lost in OT) a look at the updated standings after Manitoba defeated Rockford:

It won’t get any easier for the Moose as they face the Texas Stars in the next pair of games here in Winnipeg.  It will be quite the opportunity however to gain some ground on the team holding the fourth and final playoff spot in the Central.  The first game goes Wednesday at 7 pm.