Recap of the Moose and IceHogs game.

The Moose came into tonight’s game against the IceHogs sitting four points back of the fourth and final playoff spot in the Central Division which was held by their opponent this evening holding one game in hand.

In one of the most unusual things I’ve ever seen between one game and another the entire Moose left wing was different after four players (Harkins, Dano, McKenzie and Porier) were ruled out from today’s game.

– Alexis D’Aoust back in the lineup and he made an impact as he scored the first goal of this game. Moose up 1-0.
– It took Rockford 14 minutes before they registered their first shot of the game;
– Ryan White back in the lineup for the first time since December 1st and he made an impact scoring the second Moose goal;
– After 20 minutes the Moose were up 2-0 and held a 9-3 edge in shots.
– An IceHogs 2 on 1 was stopped in the middle frame with a great save by Eric Comrie to maintain two goal lead;
– The only Comrie misplay ended up in the back of the Manitoba net to cut the lead to 2-1;
– Comrie made a huge save shortly thereafter to keep Manitoba up by one which proved fortuitous;
– Alexis D’Aoust found a streaking Felix Girard who gives the home side their two-goal lead back;
– The IceHogs kept up the pressure but Comrie held the fort.
– The Moose picked up the victory 3-1 thanks to a stellar effort from Eric Comrie who made 33 saves in the win. 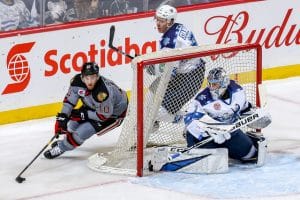 Now that the other Central games have ended (Texas won & Milwaukee lost) a look at the updated standings after Manitoba defeated Rockford:

The Moose are right back in action on Sunday as they have a re-match with the IceHogs.  Puck drop is at 2 pm.