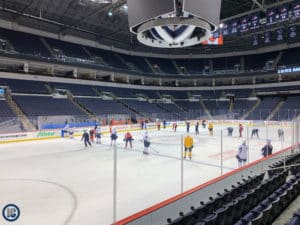 The Moose came out of their recent six-game road trip on a bit of a slide going 2-4-0-0 but they still remain within striking distance of a playoff spot.  As of last night Manitoba sits in 8th in the Central Division but just four points back of three teams (Texas, Rockford & Milwaukee) tied for the 4th and final playoff spot.   Luckily for them they return to Bell MTS Place where they have been nearly unbeatable going 12-1-0-1 in their last 14 games dating back to the Christmas reset.

Today on the ice at Bell MTS Place we saw Michael Spacek and Luke Green wearing yellow non-contact jerseys while veteran Ryan White was back in a regular Moose jersey today.  Following skate coach Vincent indicated that “Spac was just being careful, he got hit really bad.  Bone bruise.  So we’re just protecting him.  He will be good.  Luke is making good strides in the right direction so hopefully we’re going to be see him playing some games before the end of the season but I’m not sure about that yet.  First step is non-contact, being part of full practices and we’ll see how its going to go.”

Coach also provided an update on some of the players who were not skating including Peter Stoykewych “was diagnosed with appendicitis and that is going to be a few weeks” Cam Schilling (maintenance) and Skyler McKenzie “Most likely will not play this weekend.  I’m not sure yet beyond that.”

The Moose will hit the ice for another day of practice on Thursday as they get ready to kick off the second last homestand of the regular season when they take on Rockford on Saturday night.