Recap of the Moose and Admirals game.

The Moose points streak of 12 games with at least a point (11-0-0-1) at Bell MTS Place came to a crashing halt yesterday afternoon when the Admirals held on for the 6-5 win.  They would need a big effort against their Central Division rival today to end the homestand on a positive note.

– Once again Marko Dano took pre-game warm up skate but wasn’t able to dress;
– Moose went with same lineup aside from Berdin starting in net;
– Game began rather oddly with starting Admirals goalie Troy Grosenick pulling himself 1:50 into the 1st;
– A Moose player had been pushed into him and he must have tweaked something;
– Unlike the NHL the AHL doesn’t have an emergency goalie on stand-by;
– Tight opening 20 minutes of play;
– Nelson Nogier scored his first goal in two season although it may have deflected off a Moose player to open the scoring;
– 52 seconds later Logan Shaw tapped in a Harkins pass to make it 2-0;
– Lots of post-whistle antics from both squads in the eighth and final meeting between these two rivals;
– Admirals came out with some gusto to start the 3rd and a defected puck made it a one-goal game;
– In one of the most unusual plays I’ve ever seen live an own goal by the Admirals made it a 3-1 game;
– Logan Shaw was credited with the goal (his second of the game);
– Milwaukee got one back late but that was as close as they would come. 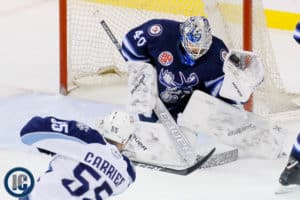 – Michael Spacek hit the four game mark with the assist he picked up on the first Moose goal (2G 3A);
– Nelson Nogier’s goal was his first of this season and last (although he only played 13 games last season due to injury);
– Jansen Harkins with the assist on Logan Shaw’s goal hit the 20 point mark (11G 9A) for the first time in his pro career;
– Moose pick up a point in 13 of their last 14 games at Bell MTS Place (25 points of a possible 28).

In an unusual twist the winning goal for the Admirals on Sunday and the Moose today were both empty net goals.

With the win Manitoba improves to 25-22-3-2 and the Moose find themselves three points back of a playoff spot with two games in hand on Rockford who hold the fourth and final playoff spot in the Central Division.

The Moose now hit the road on Tuesday for six games away from Winnipeg starting with a 10 AM CT contest with the Marlies on Wednesday in Toronto.