Recap of the Moose and Admirals game.

The Moose came into action having won eight straight at Bell MTS Place and had secured a point in 12 straight (11-0-0-1) which meant they’ve swept the last four series here.  They came into today’s game against division rival Milwaukee a point back of the Admirals who sat in sixth and just three points out of a playoff spot (currently held by Rockford) with three games in hand.

– Marko Dano was a late scratch after taking warm up (he blocked a shot at the end of the last game);
– He took warm up skate but didn’t dress for Manitoba who ended up moving their left wingers up one line each;
– Admirals got two goals to start the game as they came out really quickly;
– Early in the 2nd the Moose tied it up quickly as Skyler McKenzie and Jansen Harkins scored 1:47 apart;
– But 19 seconds later the Admirals took a 3-2 lead after the puck flubbed off Jimmy Oligny’s stick and onto Joe Pendenza’s blade;
– Four minutes later Adam Helewka got his second of the game to make it 4-2
– This was followed by Eeli Tolvanen ripping one upstairs to make it 5-2;
– Five goals was the limit and Coach Vincent gave Eric Comrie the mercy pull;
– After 40 minutes it was 5-2 and shots were 25-21 for the visitors;
– Right after the Moose got hit with a questionable faceoff violation minor in the 3rd, JC Lipon scored shorthanded to make it 5-3;
– With 6:45 left in the final period Alexis D’Aoust floated a harmless looking shot which caught Grosenick off guard to make it 5-4;
– The Moose came close to tying the game when Skyler McKenzie was a post away from making it 5-5;
– The Admirals Matt Donovan lifted a backhand which sent the puck 190 feet towards the Moose end and into the empty net;
– JC Lipon scored with 1:08 left to make it a 6-5 game but that’s as close as the Moose would come. 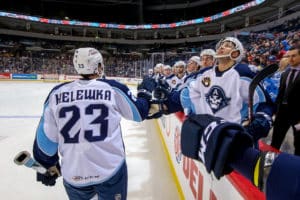 – Tucker Poolman extended his streak to eight games (1G 8A);
– Michael Spacek hit the three game mark with the assist he picked up on the first Moose goal (2G 2A);
– JC Lipon hit double digits in goals for the fourth consecutive season (third multi goal game this season);
– Seth Griffith hit the 30 assist mark for the fourth time in his career.

Despite making 15 saves on 15 shots Mikhail Berdin picked up the loss.  Imagine not giving up a goal against but getting hung with an L on the night.  Clearly not all losses are created equally.

With the loss the Moose drop to 24-22-3-2 and with an IceHogs win today, Manitoba find themselves five points back of a playoff spot although they still have three games in hand on Rockford who hold the fourth and final playoff spot in the Central Division.

In the sixth and final game of this homestand, the Moose will conclude their two-game series with the Admirals on Monday, February 18 at Bell-MTS Place at 2 pm.