Recap of the Moose and Stars game.

The Moose swept the IceHogs last weekend to kick off this six-game homestand on the right skate.  Tonight they faced their biggest challenge of the season (to date) as the Stars from Texas are in Winnipeg to play two games.  Texas came into the action holding a four point lead over Manitoba for fourth in the Central (although the Moose have two games in hand).

– The Moose were a bit loose defensively in the opening period allowing the Stars a couple of early chances;
– Texas had two power play opportunities in the opening 20 but the Moose PK was solid;
– Shots ended 8-5 in favour of the visitors;
– Cam Maclise tipped home a Logan Stanley shot to open the scoring early in the 2nd;-
– About a minute later the Stars scored a similar type of goal to tie the game;
– The visitors would take the lead on one of the oddest bounces I’ve ever seen (that resulted in a goal)

Seemingly defying the laws of physics. Although I never took physics in school so I’m not qualified to say what those laws actually are…. pic.twitter.com/lqbXGwoRPo

– Marko Dano would tie the game at 2 after deflecting a Schilling shot (similar to Maclise goal);
– Late in period Jimmy Oligny hesitated just long enough to freeze the netminder and Cam Schilling made no mistake blasting it into the now empty net to give Moose a 3-2 lead.
– The 2nd would end with the Moose up 3-2 and a 11-9 shot edge made it 17-16 for the visitors.
– The Stars would tie it just after a Moose penalty to Cam Schilling had expired in the 3rd;
– Jansen Harkins dipsy doodled and then fed Girard who scored to make it 4-3 with just over five to go;
– Moose would hold on for the 4-3 win. 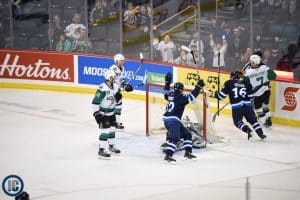 The Central got a bit more muddled as Milwaukee won this morning and Manitoba won (obviously):

This sets up to be a busy weekend for Manitoba who will have a re-match with the Stars on Friday night and then meet up with the San Diego Gulls for a pair of games starting on Sunday.