Moose hold on for thrilling 5-4 victory over the Wolves

Recap of the Moose 5-4 win over the Wolves. 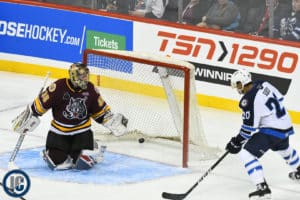 Chicago Goal: Already on their second powerplay of the game just halfway through the first period, a one-timer from the point by Daniel Carr beat Berdin, rebounded off the post and into the slot, and Gage Quinney potted the rebound.

Manitoba Goal: On a 5-on-3 powerplay, Seth Griffith fed the puck to the high slot for Michael Spacek, who ripped a wrist shot over the left pad of Oscar Dansk, tying the game at 1.

Manitoba Goal: On another powerplay, Moose defenceman Cam Schilling threw a soft point shot just wide of the net, and the puck rebounded off the dasher to C.J Suess, who got two cracks at the puck and slid it through Dansk to give the Moose a 2-1 lead. His team-leading 6th goal of the year.

Chicago Goal: On a powerplay, Wolves’ forward Curtis McKenzie fed he puck cross-crease to Daniel Carr, Moose goaltender Mikhail Berdin made a ridiculous right pad save to keep it out, but Carr got his own rebound and just poked it over the line.

Manitoba Goal: Mason Appleton picked up a Seth Griffith rebound in front, dragged the puck across the crease and slipped a backhander home to renew the lead, 3-2.

Manitoba Goal: After a dominant shift by the Griffith-Suess-Appleton line, Seth Griffith got a fluky goal, flailing at a Chicago defender’s stick, and sending a slow rolling puck past a surprised Dansk, giving the Moose a two-goal lead early in the third.

Chicago Goal: Withtheir goaltender pulled, local boy Brooks Macek set up in front of the Moose net, got a pass out front and just pushed the puck through Berdin’s five-hole to get the Wolves within two. His league-leading 10th of the year.

Chicago Goal: With 3:43 left in the game, rookie defender Nic Hague got the puck in the high slot and fired a sweet wrister high glove on Berdin to narrow the lead to just one.

#20 C.J Suess – a ‘200-foot player’ who works hard and has good hands in tight, Suess once again showed why he’s quickly moved himself up the lineup, now playing as the team’s top line centre. He scored tonight by doing the dirty work in front of the net, despite the pounding he took all night to be there. He’s used in all situations, and is tied for the team lead with 6 goals along with Mason Appleton, and is tied for first in goals among all AHL rookies.

#26 Jansen Harkins – after a brief stint a few weeks ago as the team’s number 1 centre (in place of Michael Spacek who was dealing with a family matter), Harkins returned to a more familiar role in the bottom-6. He had a few nice rushes and a good defensive play, but also gave the puck away at the offensive blueline which nearly created a clean breakaway against. He also fought Wolves defenceman Jimmy Oligny and came out on the losing end. Overall, a decent but unremarkable night for a young guy with limited ice-time.

#27 Mason Appleton – he continues to be the go-to guy on offence, with a goal and two assists tonight, and leads the team in goals, assists, and points. He plays in every situation on the ice, and just keeps getting better week by week. It’s just a matter of time before he makes his Jets debut.

#7 Logan Stanley – he was pretty solid defensively tonight, and played more and more as the game went on, including a bit of time on the powerplay. He didn’t make many noticeable errors, and he broke up a few dangerous plays. He also had more puck touches than in the previous few games. Nice progress as he shows he’s getting more comfortable at the AHL level.

#45 Luke Green – two different stories tonight for Green, depending on which side of the puck he was on. Defensively, he looked uncertain, and was beaten a few times off the rush. But offensively, he looked slick with the puck, picked up a secondary assist on the Appleton goal, and scored his first career AHL goal off a great feed by Seth Griffith. He now has 1 goal and 1 assists in 4 games this season. He has lots to learn, but it’s been a promising start to the year for this skilled offensive blueliner.

#40 Mikhail Berdin – after a great start to the season in the ECHL – 3-0-0, 1.98 GAA, .934 save %, Berdin has continued his impressive play, now victorious in his first three AHL games. His style is eccentric – he’s busy in net, the polar opposite of the pulseless Carey Price – but he’s tall (6’2), incredibly athletic, and a ton of fun to watch. His lateral movement is incredible, perfect for highlight reel saves like the initial one he made on the eventual Daniel Carr goal in the second. He was really good early in this game, keeping the Moose down by just one in the first despite being utterly dominated for the first twenty minutes. Although he allowed a few late goals, it was still a very good debut for the Russian rookie.

Notes: Kristian Vesalainen missed his second game due to an upper body injury, Skyler McKenzie missed his first game with an unspecified injury, and Sami Niku was a healthy scratch (team discipline)

Saturday, November 3 at Bell-MTS Place, again versus the Chicago Wolves.  Puck drop is at 6 pm for Video Game night.