Moose sweep the two game weekend series with the Rampage. 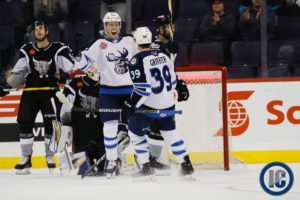 The Skinny: A matinee match-up with Central Division foe San Antonio (NHL St. Louis). Both teams currently sit low in the divisional standings, with the Moose 6th in the division (2-3-0), while the Rampage are last in 8th (1-4-0). The Moose took Friday night’s game, 4-1, on the strength of 34 saves by Eric Comrie, who was named 1st star.

Manitoba Goal: Just a minute and a half in, Mason Appleton took a quick feed from Jansen Harkins in the neutral zone and came over the San Antonio blueline down the right wing; he faked a drop pass, came down low in the zone, and fired a shot almost from the goal line which beat Ville Husso to give the Moose an early lead.

San Antonio Goal: Sam Lofquist slapper from the point hit Jansen Harkins’ stick – knocking the blade clean off the stick – and beating a screened Eric Comrie to tie things at 1.

San Antonio Goal: Just 4 seconds into a powerplay, defenceman Mitch Reinke blasted a slap shot from the top of the left circle which beat Comrie blocker side. 2-1 Rampage.

Manitoba Goal: After some great puck movement on the powerplay by the Moose, Mason Appleton got the puck over to Kristian Vesalainen, who appeared to be in a great spot to shoot; instead, he found C.J Suess beside the net and gave him a beautiful feed for a tap-in to tie the game at 2. Very heady play by Vesalainen, who now has 2 points in 2 games with the Moose.

Manitoba Goal: A great stretch pass by Peter Stoykewych sent Seth Griffith in all alone on Ville Husso – he made a quick deke to his right and sniped low glove to give the Moose a 3-2 lead.

Manitoba Goal: Shortly after the Griffith goal was announced, the Moose gained possession in the Rampage zone, and Jansen Harkins fired a harmless shot on goal. A juicy rebound found Mason Appleton’s stick, and his quick hands found the back of the net to give the Moose a two-goal cushion.

Manitoba Goal: Another great stretch pass, this time by Mason Appleton, sent Emile Poirier in all alone, and he beat Husso high blocker side to give the Moose a commanding 5-2 lead. Initially, it appeared that the puck might have hit the crossbar, but a quick video review confirmed that it was indeed a goal.

San Antonio Goal: On the powerplay following a Jansen Harkins penalty, Nikita Soshnikov blasted a one-timer high glove past Comrie to get the Rampage within two, with almost 10 minutes left to play.

Manitoba Goal: Off the rush on the powerplay, Kristian Vesalainen got the puck close to the goal line and fed the puck through a defender to Mason Appleton, who scored his 3rd goal of the game, (5th point), to help his team regain the 3-goal lead.

#13 Kristian Vesalainen – playing on the top line along with Mason Appleton, the 2017 first round pick is already looking much better than he did in his 5-game stint with the Jets. He’s getting a lot of touches on the puck, and is making plays, using his big body and long reach to shield the puck effectively from defenders. He also appears adept at using his stick defensively, stripping the puck from a defender on more than one occasion. A great feed to Suess on the powerplay showed his vision and creativity. He had 3 assists on the night, including two primary assists. Overall, a very good game for him today.

#20 C.J Suess – a hard worker who has a nose for the net, Suess appears to have endeared himself to everyone who’s seen him play this season – teammates, coaches/management, and fans alike. Currently the team’s 2nd line centre, he also appears on the 1st unit PP, and on the PK – an unusual amount of responsibility for a rookie AHL’er. With his 5th goal in just 6 games this season, he leads his team in goals, and is tied for first among all rookies.

#26 Jansen Harkins – with Michael Spacek dealing with a family matter, Harkins found himself centreing the top line. He managed to collect a pair of helpers, skating well next to budding Moose star, Mason Appleton. Harkins is a hard working player who has good vision with the puck. He needs to improve his skating in order to help him get separation with the puck in order to set up more plays.

#27 Mason Appleton – he was good early in his own zone, showing that he has the size and strength to either absorb the forecheck, or roll off of it in the defensive zone. He’s becoming a very well-rounded player, who can be counted on in every situation – even-strength, powerplay, and penalty kill. He also has a good skill-set offensviely – a good skater who can be elusive with the puck, who is equally adept at passing and shooting. He led the Moose today with a hat trick and 2 assists, and also leads them on the season with 8 points in 6 games. It’s been a strong start to the season for the reigning AHL rookie of the year.

#43 Skyler McKenzie – he was a sparkplug today, throwing around his 5’8 body with a few big hits, including one where he knocked his much larger opponent to the ice and appeared to injure him. He showed glimpses of his speed and skill, but he’s had a hard time establishing any consistency, partly because he doesn’t get a lot of ice time at this stage, playing on the 4th line and without powerplay time.

#3 Tucker Poolman – he’s a very mature defenceman at this level. He has good hockey sense, anticipation, and decision making, and makes very few mistakes. On this day, he was good in every zone, and especially good in transition, where he can make a good first pass, or lug the puck out himself. Foot speed (mainly acceleration) is a minor issue, but one that can be worked on.

#7 Logan Stanley – He imposed his will physically a few times, but has yet to make an impact with the puck, and is in tough when phasing an oncoming rush. He got walked around easily by former Maple Leaf, Nikita Soshnikov, on what initially seemed like a harmless rush. He’s got a long way to go.

#8 Sami Niku  – dynamic and skilled as always, at times it looked like he was trying to do a bit too much to create offence when there was none to be taken. He certainly was involved in the play in the offensive zone, but you’d like to see him pick his spots a bit better, and be more aware of his defensive responsibilities.

#1 Eric Comrie – he was very solid early in the game when the score was close, including a few point blank saves late in the first when the score was tied at 1. A decent game overall, but not one where he had to be the difference.

Saturday, October 27  as the Moose head out on the road for a three-game series starting with the Milwaukee Admirals, the AHL affiliate of the Nashville Predators.