A recap of the Moose loss to the Monsters.

The Moose came into tonight’s game with a record of 11-8-1-1 – good for third in the Central Division behind Milwaukee (AHL Predators), and Grand Rapids (AHL Red Wings). But the big story prior to game time was the demotion of high-end Jets prospect, Kyle Connor – last year’s leading scorer in the NCAA, who scored 35 goals and 36 assists in just 38 games at the University of Michigan. Not only was it the winger’s s first AHL game, but it happened to fall on his 20th birthday. 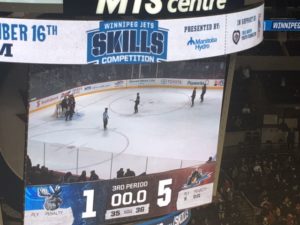 Cleveland Goal (1): On the powerplay, a Daniel Zaar one-timer deflected off Moose defenceman Kevin Czuzcman, and past Eric Comrie.

Cleveland Goal (2): On another powerplay, John Ramage froze Comrie with a fake shot, then made a nice cross-ice pass to Alex Broadhurst who one-timed it past Comrie before he could get across to his left post.

Cleveland Goal (3): After Jack Roslovic gave it away in his own end, Ryan Craig got a pass in the slot from T.J Tynan and snapped it past Comrie, glove-side.

Cleveland Goal (4): Cleveland captain Ryan Craig found a rebound out front and chipped it past Comrie to put the Monsters up 4-0.

Manitoba Goal (1): This play was all Kyle Connor – he got the puck at the left point, circled to the far side of the ice, wrapped it around on the backhand and made a lovely feed to Jack Roslovic, who potted it for the team’s first and only goal of the night.

Cleveland Goal (5): Markus Hannikainen came in short-handed and froze Comrie with a head fake, and roofed a backhand.

Kyle Connor: Connor discusses how he feels after the demotion, adjusting to a different style of game, and what he needs to work on to get back to the NHL

Eric Comrie: Not a good game by the stud goaltender tonight – he looked shaky early on his rebound control – a few fell out of his glove or hit his body and fell into a dangerous area – but he didn’t get burned on it. As the game went on, he had trouble getting across his crease, namely on the 2nd and 5th goals of the night. Overall, it was one of the worst games I’ve seen him play in pro hockey, but it happens to every goalie at some point, even to the best.

Kyle Connor: He made an immediate difference on the Moose powerplay – cutting through the defence easily on his way to the net. Throughout the night, his speed gave him separation from would-be checkers and helped him set up several plays, including some dangerous shots from the slot by Quinton Howden. He made a great set-up on Jack Roslovic’s goal (as described in the Scoring Summary above), and looked confident and in control with the puck all night. He was the only really good player for the Moose tonight.

Jack Roslovic: He formed what might become a dynamic duo with Kyle Connor, as they cycled the puck dangerously at times – Roslovic mirrored Connor by using his speed and vision to help keep control of the puck for long periods of time. Although he scored, he also led to the third goal against on a bad giveaway in his end.


Brendan Lemieux: Playing on the third line, Lemieux was pretty ineffective until a nice shift late in the third. After creating a nice chance, the shift ended with him fighting Monsters’ captain Ryan Craig. Not a banner night for Lemieux.


Chase De Leo: Not his best game – he wasn’t able to create many chances tonight, and looked a bit lost on the ice at times.


Quinton Howden: The beneficiary of some good set-ups from Connor, Howden was finding quiet spots and fired some good shots on net, though he wasn’t able to bury.


Dan DeSalvo: Fresh off signing his first AHL contract on Wednesday, DeSalvo had a quiet night. He had a few nice touches on the powerplay, but otherwise had trouble generating at even-strength.


J.C Lipon: His most notable plays include taking an interference penalty early in the game, and not seeing a streaking Jack Roslovic who may have had a breakaway had Lipon fed him the puck. He did create some decent chances while short-handed.


Jimmy Lodge: One of the only losers in Kyle Connor’s arrival, Lodge went from playing on the first line with Jack Roslovic to the third line with Patrice Cormier. However, in the third period he was promoted back into the top-6, and helped start the play that led to Roslovic’s goal.


Anthony Peluso: He didn’t play a lot, and didn’t do much while on the ice.

Darren Kramer: Only impact on the  game was taking a roughing penalty; that said, he recently won the shootout competition over DeSalvo in practice, so there’s that.

Julian Melchiori: Battled hard as always. Continues to take shots from far out with no screen rather than look for better options. Needs Skill Coach Adam Oates now more than ever.


Peter Stoykewych: Part of the top-pairing with Melchiori, Stoykewych was fairly steady for most of the game – not making many mistakes, but not making much of an impact on the game offensively. He did take a holding penalty when he got burned wide and pulled his man down.


Jan Kostalek: Had some trouble in his own zone early in the game with a few careless giveaways, but got better as the game went on, moving the puck well in transition, and making a few nice plays in the offensive zone, holding the line and keeping the play going.

Kevin Czuczman: Though he leads all Moose d-men in scoring with 12 points in 22 games, he didn’t have much going tonight. Had a number of shots blocked on the powerplay, which could have led to some dangerous chances.


Brian Strait: Had an uneventful game tonight, which is an improvement compared to how he started the season.


Jake Baker: Wasn’t too noticeable out there as the Moose’s #6 d-man, though he was one of only two Moose players who finished +1 on the night (along with Kyle Connor).