DeSalvo finally gets that AHL deal. 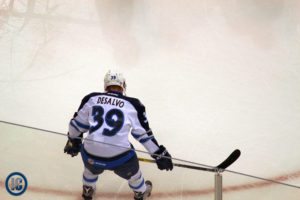 Dan DeSalvo won’t have to worry about packing his bags for Tulsa when his PTO with the Manitoba Moose runs out as the team announced they have signed him to an AHL deal.  DeSalvo has provided plenty of offence for the Moose since they signed him 11 games ago, scoring seven goals and adding seven assists for 14 points.  That is good enough for second on the team in points and he has played a lot less games than guys like Jack Roslovic (21 games – 17 points) and Quinton Howden (17 games – 12 points).

What he lacks in size (5’8″) DeSalvo more than makes up with skill and smarts.  He plays a complete game and will be a welcome addition to this Moose squad.  His shooting percentage right now is a lights out (and likely unsustainable) 35%.  When asked about his success he was candid “To be honest I’m not really sure what’s going on but I’m not complaining and hopefully it continues.”

A solid signing by a Moose team to help bolster their offence especially given they could be losing top points producer Jack Roslovic to the U.S. World Junior team for (potentially) seven Moose games.

Moose didn’t need to wish upon a star in 5-4 win over Texas
Moose hide their A-game, lose 5-1 to Monsters