A recap of the Moose 5-4 win over the Stars.

Lines started off for the Moose as follows:

It was a game the Moose almost couldn’t wait to play after they were handled rather easily by these Stars 6-1 on Saturday afternoon.  Today Manitoba came out flying and less than five minutes in Jack Roslovic re-directed a Nelson Nogier shot in for the early lead.  That goal was being announced on the PA when captain Patrice Cormier grabbed an errant Stars pass and converted it into a two goal Moose lead just 20 seconds later.

The game was a see-saw affair which saw the Jets take a two goal lead (3-1) which the Stars eventually chipped away including a somewhat controversial goal when Brian Strait got knocked down and the game was tied.

Early in the 3rd period after Coach Vincent had changed up the lines and who else but Dan DeSalvo put home a poor-angle shot that beat Stars goalie Maxime Lagace.  Texas managed to tie it up late in the 3rd on the power play but the Moose would also get a chance with his team heading to the PP with under two minutes to go in the final frame.  Rookie Jack Roslovic made a phenomenal no-look pass over to Dan De Salvo who scored his seventh goal (in 11 games) which restored the one goal lead.  The Stars had a 6-4 and managed to beat Pavelec but time had already expired and Manitoba split the weekend series with Texas with a 5-4 victory on Sunday. 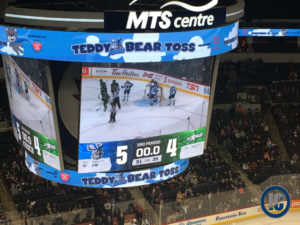 We spoke to Moose coach Pascal Vincent about the win:

Dan DeSalvo with his two goals today now has seven goals and seven assists in 11 games.

Jack Roslovic had one goal and one assist which gives him a team leading 17 points.

Following the game the entire Manitoba Moose team went up to the concourse to the autograph alley where they signed autographs for 1200+ fans.

A big win at MTS Centre. The Manitoba Moose are all smiles and so are the 1000+ fans waiting in line for autographs from these guys. #AHL pic.twitter.com/J3psQ0DjLv