It was tough 6-1 loss this afternoon at the MTS Centre for the Moose.

The pre-game Star Wars festivities had the 10,000+ fans inside the MTS Centre feeling good.  The players took to the ice for warm up wearing these R2-D2 uniforms that will be auctioned off by the Moose. 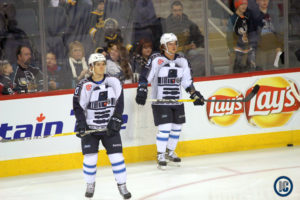 There was a touching ceremony for this young cancer survivor courtesy of Children’s Wish Foundation of Manitoba:

Nothing warms your heart more than seeing a young cancer survivor getting to enjoy his wish via @ChildrensWishMB as Conor Ray did today. pic.twitter.com/BLliHnhOTL

Unfortunately for young Conor the team came out flat. The Moose just didn’t play the type of hockey we have become accustomed to seeing them play this season. While they were only down 1-0 after 20 minutes the Stars had the majority of the chances. Within a one minute of the 2nd frame starting the Moose were down 3-0 and the Stars chased Eric Comrie from goal when they scored a fourth goal with under five minutes played in the middle period. Ondrej Pavelec came in and looked good after making his fist six saves but couldn’t stop that seventh one and Texas took a 5-0 lead during a Brenden Kichton major penalty. The Stars added a sixth goal and the Moose didn’t break the shutout until the final minute of the 3rd period. 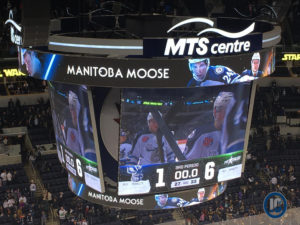 It was a discombobulated an game as I’ve seen Manitoba play, especially surprising considering it comes on the heels of a three game win streak against tough central division opponents on the road.

Post-game no excuses were made for that effort.