Recap of the game with audio from the Moose room. 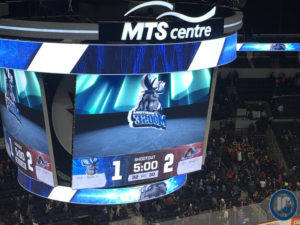 Following the 5-1 shellacking that Manitoba received from Cleveland on Friday night here in Winnipeg the expectation was the Moose would show a much better effort this afternoon when the two teams met at 2 pm.  Similar to what happened against Texas last week the Moose jumped out and controlled much of the play, including a number of quality scoring chances.  Neither side could solve the opposing in the 1st period.

During the 1st intermission the Moose held their annual Teddy Bear toss to help gather gifts for less fortunate children and as you can see below many Winnipeggers broughts gifts to today’s game. In fact the team collected 2905 bears in total.

The annual Manitoba Moose Teddy Bear Toss is underway at the MTS Centre. Lots of kids who need them will be getting some nice gifts this season. #AHL #winnipeg #hockey #manitobamoose #MBMoose

Playing in just his second AHL game Kyle Connor made an impact on the power play scoring a really nice pass by Chase De Leo to give Manitoba a 1-0 lead in the 2nd period.

Manitoba looked like they had added to their lead when Quinton Howden scored but the goal was waived off because the far referee had called Chase De Leo for a slashing penalty. The Moose managed to close out this period with a 1-0 lead and a 20-17 edge in shots.

Once again Manitoba almost jumped out to a two goal lead when Kyle Connor rifled a shot over the empty net. The Monsters took the puck up the ice and beat Ondrej Pavelec to tie the game up at one. While both teams got power play opportunities neither side could score and it was off to OT. The extra time solved nothing so it meant the game would be decided in a shootout.

Kyle Connor was the first Moose shooter and he scored a filthy one to give Manitoba the advantage.

However neither Chase De Leo or Dan DeSalvo would score whereas two Monsters did and that was the difference in this one. A better effort by the Moose but they fall 2-1 in a shootout to the Monsters. The Moose record is now 11-9-1-1 and they won’t play again until December 13th at Charlotte.