A report of the Moose skate at the MTS Centre. 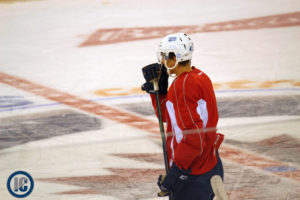 The Moose hit the ice today at 12 noon for a final practice before heading out on the road tomorrow morning for a five game in seven day road trip.  The trip begins with a pair of games against the Checkers in Charlotte on Tuesday and Wednesday.  They will then transit over to Illinois where they have a couple of days before their next game.  They will play three games in three days beginning Saturday night in Rockford against the IceHogs at 7 pm, followed by a quick charter to Iowa where they will play the Wild at 3 pm on Saturday afternoon followed by a re-match with the Wild at 7 pm on Monday.

Today on the ice all players were present and accounted for including Scott Glennie and Scott Kosmachuk who had recently been out of the lineup.

Following skate we spoke to the players and coach Vincent.

Coach Vincent:  On the team as they get ready to head out on the road trip.  Injury updates.  Roslovic leaving team to join USA World Junior team and development of Jimmy Lodge.

Jack Roslovic:  On going to the USA camp for the World Juniors.

Jimmy Lodge:  On his improved play this season.